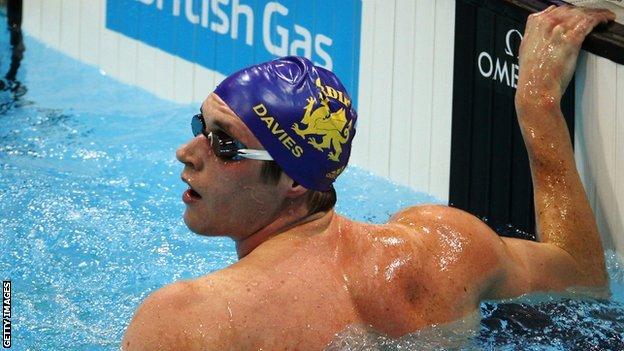 Welshman Davies, 27, won a bronze medal in the 1500 metres at Athens 2004 and then silver in the open water four years later at the Beijing Games.

"He's an Olympic bronze medallist in the 1500m in the pool, then he went and did the open water and got a silver in Beijing."

Davies has already claimed his Team GB place in the 1500m, but must still win a place in his prefered open water event at a qualifier in Portugal in June.

I wish him very, very well and you've got a national treasure in David Davies

The Welshman has endured a difficult few years and considered quitting because of the fatigue problems that forced him to withdraw from the World Championships, but Foster believes those problems are behind Davies.

"David went off for a few years but he just got over-training fatigue syndrome and basically people don't understand it but you train too hard and his body just shut down," Foster said.

"He had to rest up a little bit, train differently... he seems to be getting back to his best and hopefully in three weeks he can qualify.

"If he gets a position in that race, the open water at the Olympic Games, he could win it. It's one of those ones that could be anyone's but he could be in it.

"I wish him very, very well and you've got a national treasure in David, I don't think any swimmer has medalled in three consecutive Games so get behind him and support him."

Foster believes that the open water is Davies' best chance of a medal and ideally he should put all his efforts into just one event.

"If you said to me before the Games what he should concentrate on then I'd say the open water without a shadow of a doubt, I think he's got the best opportunity in the open water," added six-time world champion Foster, who competed in the 50m freestyle and butterfly for Britain.

"But he hasn't got that luxury at the moment, he's got to do the pool and the open water.

"He had to qualify in the pool to be able to go and get this spot in the open water, so he had to do the pool anyway."