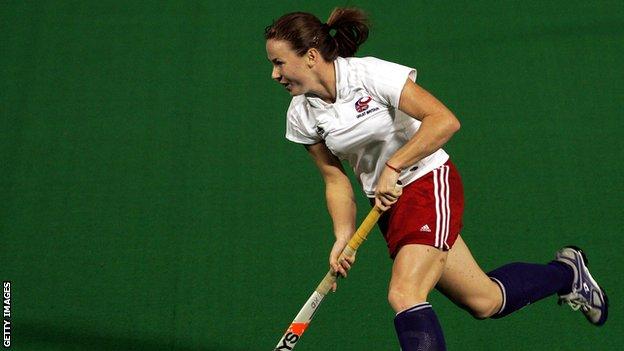 Sarah Thomas is confident she will be fit for the Olympics despite being ruled out of the Investec London Cup with injury.

Thomas has been ruled out the Great Britain squad for the tournament by an ankle injury.

"It was really disappointing when I tore a ligament in my ankle 10 days ago," said Thomas.

"That is the most important thing."

Thomas revealed she has has been on crutches since the injury.

Thomas is one of three players, along with Crista Cullen and Alex Danson, ruled out the Great Britain squad for the tournament.

Leicester duo Rebecca Herbert and Kerry Williams and Susie Gilbert of University of Birmingham will replace them.

The 31-year-old, the only Welsh member of the GB squad is expected to be fit of the Olympics campaign which starts on 29 July.

Leicester duo Rebecca Herbert and Kerry Williams and Susie Gilbert of University of Birmingham have all been drafted into the squad as replacements.

The squad for the London Cup has 18 players rather than 16 in the Olympic squad, so 2012 reserve players Abi Walker and Natalie Seymour will be involved in Chiswick.

Great Britain begin their campaign against South Africa and then face Germany.

GB head coach Danny Kerry says Thomas, Cullen and Danson will be fit for the Olympics.

"Beckie, Kerry and Susie will replace Alex, Sarah and Crista who are making good progress in their rehab in time for the Olympic Games," said Kerry.

"The three replacements understand our play well and bring good energy and pace to the team."