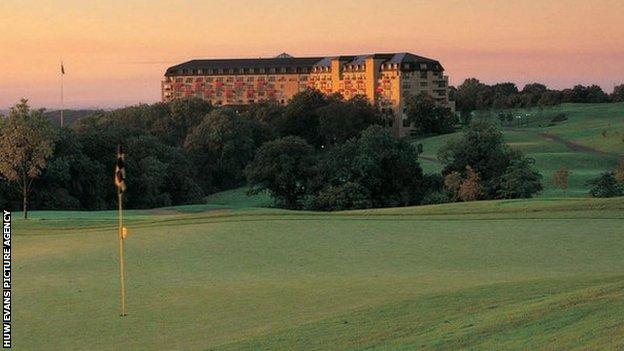 The Wales Open is set to come to an end once the Celtic Manor's current deal to host the golf tournament ends in 2014.

But the 2010 Ryder Cup venue wants to keep a presence on the European Tour and is a possible venue for the World Match Play Championship from 2015.

The Wales Open has struggled to attract the world's top players and hotel owner Sir Terry Matthews has bemoaned the event's position in the golf calendar.

A Celtic Manor spokesman said: "We are keen to keep a big golf presence."

But admitted: "The present contract expires in 2014 and it is unlikely it will continue in its present form.

"We are looking at a number of options for big golf tournaments at Celtic Manor post 2014."

The date slot given by the European Tour for the Wales Open - which offers £1.8m prize money - clashes with Jack Nicholas' prestigious Memorial Championship on the USPGA tour as players prepare for June's US Open, the second major tournament of the year.

The Celtic Manor began hosting the Wales Open in 2000 - after agreeing a 15-year deal with the European Tour - to show the resort's golfing credentials prior to staging the Ryder Cup.

Owner Matthews has recently unveiled plans for a of the resort, including new accommodation and Europe's longest zip wire attraction.

But the billionaire has remained coy on what the long-term future is for the complex in golfing terms.

"We might not have the Wales Open after 2014, but that won't stop golf being played here," Matthews had said.

"We are always working with the European Tour and talking about moving or tinkering with the date.

"At this time of the year we have the advantage of the long, long days and lots of daylight, but there are disadvantages to our spot as well.

"It clashes with a long weekend in the States and the Memorial event they have on the USPGA, which is very popular over there.

"To be quite open with you, for us it is an ongoing debate with the European Tour, considering whether we could improve the tournament by changing the date."

Since 2007, however, the annual matchplay event has been played at Finca Cortesin near Marbella in Spain but organisers and sponsors are considering bringing the event back to the United Kingdom.

And the Celtic Manor, a three-course resort near Newport, would be a possible venue alongside other former Ryder Cup venues such as the Belfry and Wentworth, which hosts the PGA Championship.