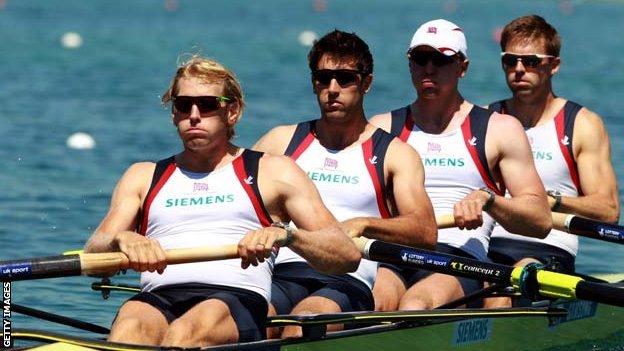 Twenty four hours on from defeat at the hands of Australia in Munich, Tom James wanders through the Team GB preparation camp in Loughborough with a wry smile towards the assembled media.

As a gold medal winner in the coxless four at the 2008 Olympics, James knows the attention focused by the British media on the performance of his boat.

While being beaten twice by their closest rivals during the final World Cup event of the season has inspired countless column inches and minutes of TV time, the rowers themselves appear to take it in their stride.

"It's not something we're going to panic about. I don't enjoy losing but it's much better it happens now than in six weeks' time," confesses the Welshman.

Decked out in the Stella McCartney designed Team GB tracksuit top, with his own jeans and trainers out of the shots of the assembled TV crews, James has been freshly kitted out with his official issue Olympic clothing.

"You really start to feel part of something much bigger than just a rowing team now," he said. "We're part of huge group of athletes, footballers, cyclists... It's pretty special."

The defeats by Australia are the only blots on the copybook of the current coxless four crew.

"After we beat Australia in Lucerne [at the previous World Cup event in May] the bookies installed us as 4-9 on favourites and had the Australians at 10-1... So maybe now there's a bit of pressure off us," he added.

You sense that this is not an attempt to deflect the attention away from the performances over the weekend; James genuinely looks at ease with the pressures involved in being a gold medal favourite for a home Olympiad.

"Gold medals aren't certainties, we were never going to just turn up and be crowned Olympic champions." He thinks for a moment before expanding his point. "In a way, you just wonder whether it might be a good thing, I think it takes the pressure off now that the public know how much of a real threat the Australians will be."

Head coach Jurgen Grobler has rearranged the line-up of the crew since last year's World Championship success. James and Alex Gregory survived the cut and were joined by Peter Read and Andrew Triggs-Hodge, both part of the 2008 Gold medal winning coxless four.

"We've been rearranging the seat order for most of the season and I think we might look at going back to the order we had when we won in Lucerne." James ponders, before checking himself with the proviso "that would be up to Jurgen of course..."

The next steps of the Olympic journey will be taken at altitude. Silvretta in Austria is the destination to work on their speed over the next three weeks.

The pressure of being a defending Olympic champion in a "home" Games is accompanied by a certain kind of confidence. A surety based in the knowledge that ones talent, combined with years of hard work, have been successful in the past.

At 11:30 on the morning of the 4 August, James and his crew mates will again do battle with the Australians.

This time Olympic gold will be on offer and whatever the odds few would bet against the British pulling it off again.