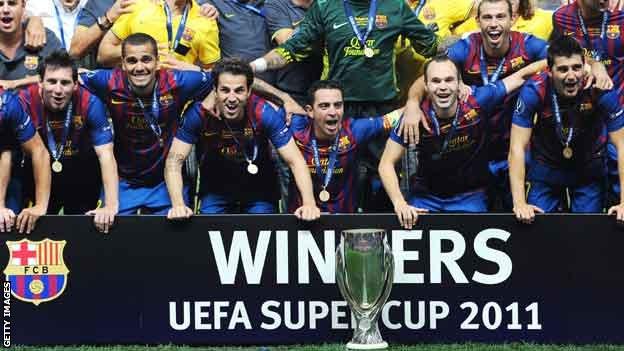 The 2014 European Super Cup final will be held at Cardiff City Stadium, Uefa has announced.

Lionel Messi and Cesc Fabregas scored Barcelona's goals as they beat Porto 2-0 in the 2011 final.

Monaco's Stade Louis II Stadium has been the Super Cup final venue since 1998.

Prague's Eden Stadium will host the 2013 Super Cup final with Tbilis's Mikheil Meskhi Stadium the venue for the 2015 final.

"The Football Association of Wales is delighted that Cardiff will host this prestigious match," said FAW chief executive Jonathan Ford.

"It is a great opportunity for football supporters in Wales to watch two of the best teams in Europe in a one off game."

Cardiff City Stadium, which has an all-seated capacity of just under 27,000, has been the home of Cardiff City since 2009.

The stadium has staged six Wales international matches and has been confirmed as the venue for the World Cup qualifiers against Belgium and Scotland in the autumn.

Until recently the stadium was also home to regional rugby side Cardiff Blues, who opted to move back to the Arms Park.