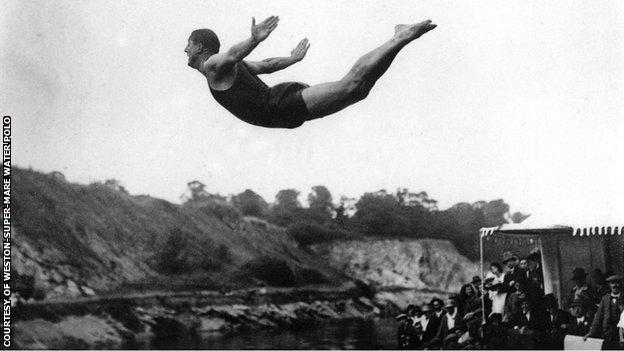 Paulo Radmilovic is not just Wales' most successful Olympian.

For 80 years he was also Britain's most successful until rower Sir Steve Redgrave won a fifth gold medal at the 2000 Games in Sydney.

Born in Cardiff, Radmilovic was an excellent swimmer over all distances but it was as a water polo player that he reached full fame.

Radmilovic appeared in five Olympics between 1908 and 1928, winning four gold medals including the first claimed by a Welshman.

That came at the 1908 London Games when as part of the British water polo team, 'Raddy' scored two goals in the final in a 9-2 victory over Belgium.

Radmilovic was then drafted into the 4x200 metres swimming relay team after another athlete withdrew through illness.

The British four set a world record in the semi-finals before winning a thrilling final over Hungary, the United States and an Australasia team.

It was a great Games for Wales as, nine days after the water polo final, rower Sir Albert Gladstone also struck gold as part of the men's eight.

One of Radmilovic's team-mates in the relay squad was fellow swimming great Henry Taylor, who became the first Briton to win three gold medals at a single Games having also won the 400m and 1,500m.

That record for a British athlete was not equalled until 2008, when track cyclist Sir Chris Hoy won three gold medals at the Beijing Olympics.

He also played in the 1924 Paris and 1928 Amsterdam Olympics, by which time Radmilovic was 42 years old. He had made his debut for the Wales national water polo team in 1901 at the age of 15.

Radmilovic was no shrinking violet, hardly surprising given the rough and tumble of competitive water polo where the clash of bodies and limbs below the surface are hidden from the casual viewer.

In an interview for BBC Radio, recorded in 1951, the Welshman also demonstrated he was not one for false modesty: "Don't think I'm blowing my trumpet because if you're on the mic [microphone] you've got to say what you can do.

I tried to swim in the Cardiff canals before the Corporation Baths were built and I nearly drowned twice!

"That stands out definitely because all the States of America, everybody is asking: 'Who is this man?'.

"And it's proved I had six Olympics which stands out as a world record, and there's another record that goes to me.

The son of a Dubrovnik-born father and a mother of Irish extraction, Radmilovic was raised in the Tiger Bay area of Cardiff, where his father was landlord at the Glastonbury Arms in Bute Street.

The water lured Radmilovic from an early age, but the canals and rivers of Cardiff nearly claimed his life.

"I started swimming when I was quite a young boy, perhaps at the age of five," said Radmilovic who later became known as 'the Shark Man of the Taff'.

"But I couldn't swim because I tried to swim in the Cardiff canals before the Corporation Baths were built and I nearly drowned twice!

"They pulled me out of the canal and my father said, 'well now they've built the new Corporation Baths, put the child in the bath and let him learn to swim'.

"Then when I went on a few years I started to enter competition and won everything I went in for. I won the Junior Welsh Championships and at the age of 14 I represented Wales as an international swimmer... that was my first [senior] international."

Radmilovic followed his father into the licensed trade, eventually settling in Weston-super-Mare where he ran the Imperial Hotel and played for the star-studded local water polo team.

In 1967, a year before his death, Radmilovic was inducted into the International Swimming Hall of Fame, only the third Briton to receive this honour after pioneering English Channel swimmer Captain Mathew Webb and coach Matthew Mann.