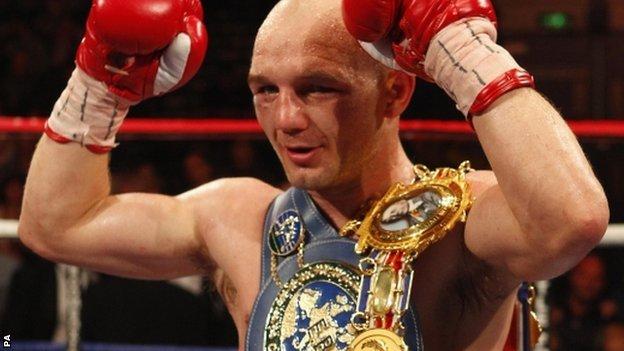 Gavin Rees has set his sights on the vacant WBA lightweight title to fulfil his dream of becoming a two-weight world champion.

Rees added the British belt to his European title on Saturday with a ninth-round win over Derry Mathews.

"Becoming a two-weight world champion is what I've dreamt about for the last couple of years," said Welshman Rees.

Cuban Abril, 29, holds the interim WBA title despite losing his last bout to a controversial split decision to Brandon Rios in April.

Such was the dubious nature of the result, the governing body reinstated Abril as their interim champion.

Before Rees beat Mathews to defend his European title for a second time, his promoter, Eddie Hearn, revealed he was already negotiating a potential world title shot for October.

Rees' only defeat over his 39-fight career came when he lost his WBA light welterweight crown to Andriy Kotelnyk in 2008.

A move down a weight has brought 10 wins and a technical draw with Mathews following an accidental fourth-round clash of heads, and Rees now feels ready to step up to the elite level once more.

"Abril is obviously a good, talented kid but when you're boxing for a world title you expect to fight the best in the world," said Rees, hoping to emulate former stablemate Joe Calzaghe as a two-weight world champion.

"I consider myself to be one of the best so it should be a great fight.

"The WBA title is vacant and my promoter says the fight with Abril is in negotiation. He reckons it's a cert so I'll just wait for confirmation."