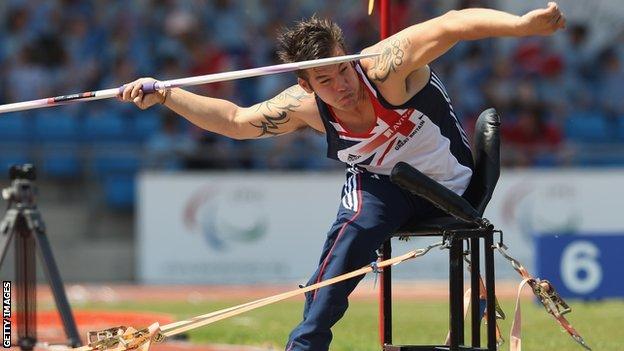 The F57 javelin world champion, who at the 2011 Czech Athletics Open, is a strong medal hope in a 13-strong Welsh athletics squad.

"This is probably the strongest GB Paralympic athletics squad since Sydney in 2000. The GB team had a disappointing time in Beijing with just two gold medals but since then they have had a revival under coach Peter Eriksson and more will be expected of them in London. This team has a good mix of experienced campaigners like Dave Weir, Shelly Woods and Libby Clegg and newcomers like Hannah Cockcroft, Sally Brown, Jonnie Peacock and Jade Jones. I definitely think a target of 10 golds is a realistic one."

Tracey Hinton, who recently won two golds at the European Championships, will be competing in her sixth Games.

The 42-year-old, who is blind, made her debut in Barcelona in 1992 and has won three silvers and three bronzes during her Paralympic career so far.

Both are among 13 Welsh participants named in the British Paralympic Association's 49-strong athletics team for the Games with 50 days to go to the start of the showpiece.

The young Welsh team includes six members that are aged 21 or under.

The athletics announcement completes the line up for the ParalympicsGB team in London which will feature 288 athletes, alongside a further 13 team members, including sighted goalkeepers, tandem riders and guide runners.