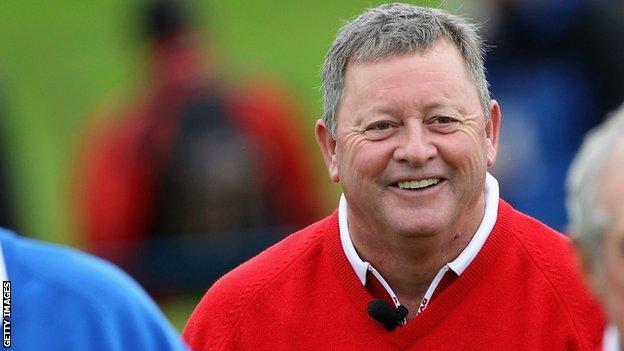 Ian Woosnam has admitted he would "love" to be one of Europe captain Jose Maria Olazabal's Ryder Cup assistants.

Olazabal will for September's event at Medinah, Illinois as Europe hope to retain the trophy won at Celtic Manor in 2010.

Woosnam assisted Sam Torrance to Ryder Cup victory in 2002 at the Belfry and the Welshman was a victorious skipper in a record win at the K Club in 2006.

"If he rings, I would definitely be interested in helping," Woosnam said.

Colin Montgomerie was chosen as Europe captain in the 2010 Ryder Cup at Celtic Manor in Newport.

Woosnam had offered himself as 2010 Europe captain, and the Welshman subsequently ruled himself out of being part of Montgomerie's backroom team for the event in his home country.

Former world number one Woosnam played, alongside Olazabal in five Ryder Cups, beginning with Europe's defeat at Muirfield in 1987.

Olazabal beat Woosnam to the 1990 Benson & Hedges International Open at St Mellion but the Welshman went on to beat the Spaniard by a shot in his only major triumph at the 1991 Masters in Augusta.

Under Woosnam's captaincy, Olazabal scored three points for the European team in their 18-and-a-half to nine-and-a-half victory over the United States in Ireland in 2006.

Woosnam has had no contact from the 46-year-old double Masters champion, who has been a Ryder Cup vice-captain to Nick Faldo (2008) and Colin Montgomerie (2010), but feels his experience may be beneficial.

"I know Jose well and I feel I know the way he will manage and captain the team," eight-time Ryder Cup player Woosnam told BBC Sport.

"I have known Jose since 1987 and I am sure he will do a great job whoever he has in his team.

"He is a two-time major winner, he's the type of guy I'd want to play for. I would have loved to play underneath him, he has a great Ryder Cup record which demands the respect of everybody.

"The players are top golfers, I liken them to 12 stallions who have all got their own minds and own wills, and the challenge is to encourage and get them to play together.

"You must get them to enjoy the occasion and take the pressure off them and ensure both players in each pairings are comfortable with each other when they go out on the course.

"Jose will already be working out his team and his partnerships.

"I can help give my experience, advise what it was like when I was captain, help with the pairings and just be there for Jose to take the pressure off.

"Jose will have so much to deal with like press commitments, getting his teams in and monitoring his pairings out on the course - assistants are there to give him a feel of who is playing well or playing badly and making his job just the little bit easier.

"But I'm looking forward to the Ryder Cup whether I'm sat down watching it on the television or actually at Medinah, but I think it will be really close again which is good for the Ryder Cup."