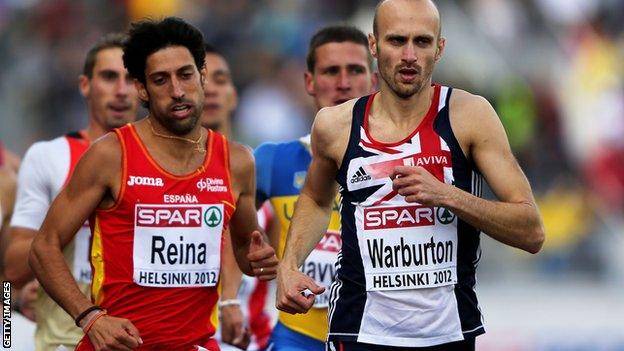 Gareth Warburton is ready to put the "crazy week" of his succesful appeal against omission from Team GB behind him and focus on London 2012.

Warburton was just 0.2 seconds away from achieving the qualifying time needed to qualify and missed out on selection.

The Welsh 800m runner was added to the athletics team after winning an appeal against omission.

"Now it's all geared towards the Olympics. I have a Diamond League race and then a big race in Cardiff."

Warburton was originally left out of the squad after failing to achieve the second 'A' qualifying time he needed at the European Championships in Helsinki.

But his successful appeal means he will join Andrew Osagie and Michael Rimmer in the 800m at London.

His focus now turns to his final two last competitive races before flying out for a two-week pre-Olympics GB training camp in Portugal.

The 30-year-old will run in the Diamond League meeting at Crystal Palace on Saturday before a return home to Wales for the Welsh Athletics International on July 18.

"The Diamond League is always a big race with all the top runners in the world there and it's always good to see how you fare against those guys," said Warburton.

"My last race will be the one in Cardiff and I am doing the 400m and the 4x400m and some of the best runners in the world are going to be there.

"David Rudisha is going to be there, the world record holder in the 800m, so it's going to be a great event."

Warburton, who came fourth in the last Commonwealth Games in 2010 in Delhi, has set himself a target of qualifying for the 800m Olympic final.

Warburton will be joined by fellow Welsh athletes at the Welsh Athletics International at the Cardiff International Sports Stadium.

Rudisha, the 800m record holder and former double Olympic gold medallist Kerron Clements, are all expected to use the Cardiff event as part of their preparation for the London Games.