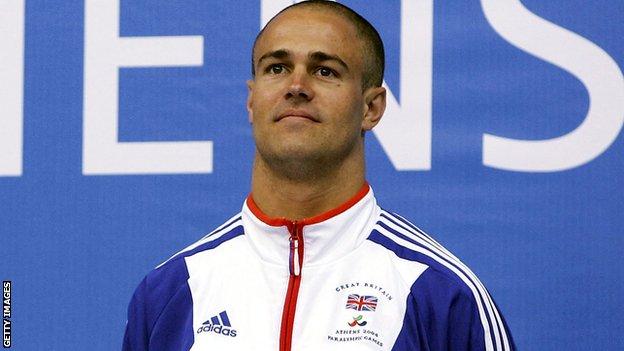 Dave Roberts says he could switch allegiance to compete for Sweden at the 2016 Paralympics in Rio de Janeiro.

The 11-time Paralympic gold medallist failed to secure selection for the GB swimming team at the London Games.

Welshman Roberts, 32, is set to marry a Swedish national in December and is contemplating moving to Sweden to gain citizenship.

"Who knows, you may see me swimming for a different country?

"That's what you do in life and in sport in general - you can't allow something to knock you down or push you away because that's not what life's about."

"Dave will be very disappointed to have missed out on the opportunity to compete in London and have a chance to better Mike Kenny's record of 16 Paralympic golds, or Tanni Grey-Thompson's tally of 11, but British Swimming were left with no other choice. Although Dave has a great past record, there is nothing to suggest he can replicate that sort of form now. He didn't perform well at the trials where he looked out of shape and the times he set there would have left him nowhere in London. I'm not sure what he will do now. He has previously mentioned retiring but I don't know what he would do without swimming as it has been a big part of his life for a long time."

Roberts was omitted from the GB squad for the Paralympics after failing to prove his fitness this year.

He missed the first set of GB trials through illness and failed to make the qualifying times for the 50m and 100m freestyle at the second trials in Sheffield in April.

Roberts attributed his poor form to illness over the past three years, specifically citing a recent bout of pneumonia and a torn tricep for his failure at the trials.

"I've pushed my body to the absolute limit to have a chance of achieving a dream and it's been snatched away from me," he said.

"I don't think I'll ever forgive it, but life moves on. I'm not bitter, I just feel let down."

Roberts won the right to challenge the decision to omit him from the squad, arguing British Swimming failed to follow its own selection policy of taking fitness and medical issues into consideration.

That forced British Swimming to review its selection, but the decision was not reversed, depriving Roberts an opportunity to fulfil his dream of surpassing Baroness Tanni Grey-Thompson as Britain's greatest Paralympian in the modern era.

"This is not retirement for me by a long shot," said Roberts, who needs one more gold to surpass Grey-Thompson's record.

"Who I'll swim for in the future, who knows? But it's not the end.

"That means I've got to look into the future to make sure that I am.

"I will never take anything away from it because it's probably unlikely to be rivalled by any swimmer Britain will ever have.

"But it's not good enough for me. I'm a perfectionist, I want the best."