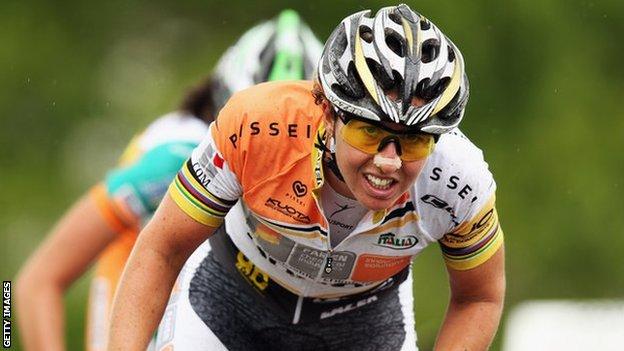 However, Sutton insists his statement is not a criticism and that Sir Chris Hoy has had similiar problems.

He said: "Nicole's become one of these people that most people do in life - they don't cope with success."

Road race gold medallist Cooke says there were no examples for her to emulate after the 2008 Games.

Cooke won the 2004 Giro D'Italia Feminile, plus the La Grande Boucle Féminine in 2006 and 2007 among numerous podium finishes before making history at the 2008 Games by becoming Wales' second woman Olympic gold winner.

Sir Chris [Hoy] won't mind me saying the guy crumbled for 12 months after all that success because of the change in lifestyle. He couldn't cope

Since the euphoria of that triumph, Cooke has been unable to reach the heights she previously enjoyed.

"When you win - most people, they can't cope with success.

"That's not a criticism, I'm just saying it from the likes of Jason Queeley, I've seen it with the likes of Sir Chris Hoy.

"Sir Chris won't mind me saying the guy crumbled for 12 months after all that success because of the change in lifestyle. He couldn't cope."

Cooke does not deny Sutton has a point, but points to a lack of guidance from within the sport in the wake of her Beijing triumph.

She told Wales at the Olympics: "There were so many steps along the way where you could look at any little phase of my career and say 'I could have done that better'.

"But who was there to advise me?

"No one had ever done it before. No other British rider had become world number one.

Between 2001 and 2009, Nicole Cooke (left) won an unprecedented nine consecutive British national road race titles. However, in 2010 Emma Pooley took the honours with Lizzie Armitstead second. In 2011, Armitstead won the title ahead of Cooke. In 2012 the race was won by Sharon Laws with Cooke sixth.

"So if there was a book written on how to do that, well I would have been very happy to have it.

"But there wasn't a book so I had to do the best I could and yeah, it was part of the journey."

Even so Cooke has the chance to defend her title after securing a place in Great Britain's team for the women's road race in London.

She will be joined by Lizzie Armitstead, Lucy Martin and Emma Pooley at the Games, with Katie Colclough and Sharon Laws having been dropped from the initial squad of six.

However, Cooke is likely to be asked to sacrifice her own gold medal ambition to be a support rider.

British number one Armitstead is expected to be the team leader in the race, with the other three team members expected to ensure she is given the best opportunity possible to claim gold.

Cooke has already indicated she is willing to accept that role - known in cycling as a 'domestique' - while also retaining an ambition to be the team leader and therefore be given an opportunity to defend her title on home soil.

A decision on who will be the team leader will not be taken until closer to the race itself, which takes place on Sunday, 29 July.