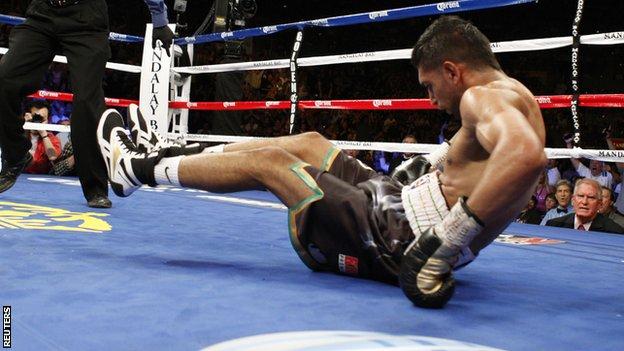 Khan, 25, insists he will not retire after being stopped in the fourth round by unbeaten WBC champion Danny Garcia in Las Vegas on Sunday.

But he may look to work with another trainer because current coach Freddie Roach cannot commit totally to him.

"My next goal is to talk to Amir Khan and his team," said Calzaghe.

"We spoke before, about three years ago. I have always believed Amir is a great fighter, despite what people think.

"People say he should quit but I don't think he should be quitting. I believe with the right trainer - and my CV speaks for itself - he will be unbeatable.

"I would love to train the kid."

The 63-year-old, one-time coach of former super-middleweight champion Joe Calzaghe, had his in June after his old one lapsed following son Joe's retirement in 2009.

Calzaghe, who took a break from boxing when Calzaghe Jr retired, has been in the corner for 33 world title fights for Calzaghe, former WBO cruiserweight champion Enzo Maccarinelli and former WBA light-welterweight titleholder Gavin Rees.

He currently has no top fighter in his south Wales stable but Calzaghe is keen to talk with 2004 Olympic silver medallist Khan, who has been trained by Roach in the United States since 2008.

The Bolton boxer, who thinks he will be back in action with another light-welterweight fight in December, has stated things must change in his preparation for bouts following successive defeats to Lamont Peterson and now Garcia.

While Khan is keen to remain with his current mentor, he feels he needs guarantees.

"Freddie is a very busy guy and he is busy because he is a great trainer and is one of the best and biggest names out there.

"I don't really want to be sharing.

"When I'm not there I don't mind what Freddie does, but [in camp] I just need someone who is going to be with me constantly and working hard with me."