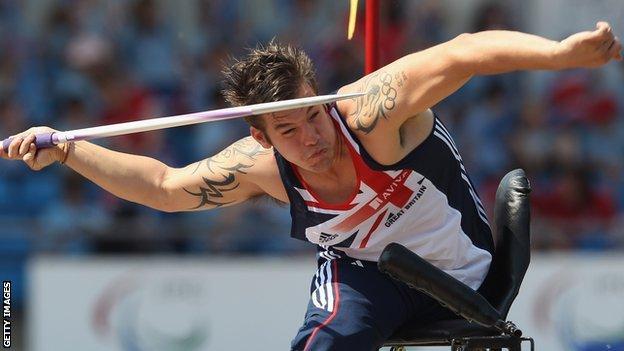 Wales will have 38 athletes at the 2012 Paralympics, more than ever before - and seven more than went to Beijing four years ago. The big challenge now, for what has been described as Wales' golden generation in world disability sport, is to match or better the Welsh medal haul in 2008. It will not be easy.

In Beijing, Welsh athletes won 14 medals - 10 gold, three silver and one bronze - putting Wales well clear at the top of the medal table on the basis of population.

Welsh athletes won a gold medal for every 359,000 people. The next best country on that basis was New Zealand, about 500,000 people behind per gold medallist.

A large part of that success was David Roberts. The swimmer from Llantwit Fardre, near Pontypridd, won four gold medals, adding to the seven golds he had already won at the two previous Paralympics in Sydney and Athens.

All he needed was one more gold medal to overtake Baroness Tanni Grey Thompson and become Britain's most successful Paralympian in the modern era, but he missed out on selection for London, and was unsuccessful in his appeal against the decision.

That means Wales, and Paralympics GB, need someone to take his place as the star of London 2012. That man could be cyclist Mark Colbourne.

Colbourne broke his back in May 2009, in a paragliding accident on Rhossili beach in the Gower, but 18 months later, at the age of 41, he won a silver medal at the Paracycling World Road Race Championships.

Since then, his results have continued to improve. Earlier in 2012, he won a gold and silver medal in the World Track Championships in Los Angeles, gold in the 3km pursuit and silver in the 1km time trial.

He will compete in both those events at the Velodrome in London, and is expecting a medal in both. He will also compete in two races at Brands Hatch, the road race and the time trial, which is his strongest suit having won two silver medals in that event at two World Cup events in 2012.

Claire Williams: Fifth in the last two Paralympics in the F12 discus and won a bronze medal at the 2012 European Championships.

Kyron Duke: Bronze medals at 2011 World Championships and 2012 European Championships in F40 Javelin. He also won European silver in shot putt, and will be competing in the shot and javelin

Back in the pool, there may be no Roberts in London, but Wales will have three previous Paralympic medallists, including two Paralympic champions, in the Aquatics centre.

Nyree Kindred, from Porth in Rhondda, will be competing in her fourth Paralympics, and has won medals on all three previous occasions. In all, she has nine medals - two gold, four silver and three bronze. Her most successful Games were in Athens eight years ago when she won two gold medals, and five in all. Last time in Beijing, she won a silver medal in the S6 100m backstroke, her chosen event this summer.

Newport's Liz Johnson is another of Wales' big hopes in the pool. She won gold in Beijing in the SB6 100m breaststroke, adding to the silver she won in that event in Athens four years ago, and she will be defending her title in London.

Like Johnson, Rhiannon Henry from Bridgend is going to her third Paralympics. She won two bronze medals in Athens in 2004, but failed to make the podium in Beijing four years later. She will be competing in the S13 50m and 100m freestyle and the SM13 200m individual medley.

The team of four Welsh swimmers in London is completed by 15-year-old Morgyn Peters from Cardiff, who will be one of 19 Welsh athletes making their Paralympic debut in London.

Much like the Olympics, the main focus of media attention during the Games is likely to fall on the athletics stadium, with South African blade runner Oscar Pistorius and Britain's 100m world record holder Jonnie Peacock likely to be among the stars of the track. However, it is in the field events where Britain, and Wales, have some of their best chances of gold medals.

Aled Sion Davies from Bridgend will be competing in the both the discus and shot putt in the F42 class. He won a silver medal in the discus at the 2011 World Championships in New Zealand, and finished fourth in the shot putt. Then in April, he broke the shot putt world record. Two medals in London a real possibility for him.

His training partner from Bridgend, Nathan Stephens, will be competing in his second Paralympics, having missed out on a medal in the javelin, shot putt and discus in Beijing. Hehe won gold in the 2011 World Championships and went on to set a new world record.

In total there will be 12 Welsh competitors in the athletics stadium.

The most experienced member of the team is Cardiff sprinter Tracey Hinton. She competed in her first Paralympics in Barcelona 20 years ago. London 2012 will be her sixth Games, with three silver and three bronze medals to her name, and she goes to London in her fine form having won European gold medals in the T11 100m and 200m.

Elsewhere, Wales will have representatives across 13 sports. Archer Pippa Britton from Cowbridge is ranked number two in the world, and has won a medal in each of her five appearances at World Championships. Sailor Steve Thomas and his three-person keel boat crew go into the competition after winning world silver medals, and Sara Head is a European table tennis champion.

So, with realistic medal chances across several sports, and more than one chance in the Velodrome, athletics stadium and the pool, Wales' biggest Paralympics team could yet emulate the Welsh Olympians and make London 2012 the most successful in history.