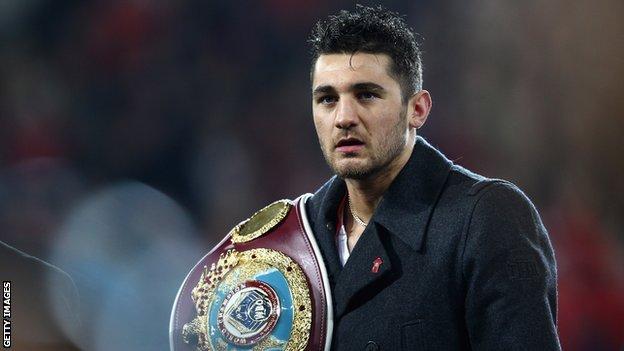 Nathan Cleverly will make the fourth defence of his WBO light-heavyweight title against Vyacheslav Uzelkov.

The Welshman will again fight on home soil as he will face Ukraine's Uzelkov at the Motorpoint Arena in Cardiff on 27 October.

Vyacheslav is currently ranked ninth in the world by the WBO.

"Uzelkov... has already mixed it with Beibut Shumenov for the world title so I know he'll be a hard defence for me," Cleverly said.

"I've seen some of his fights already and he looks strong and comes forward which will be perfect for me.

"Every defence of my title is vital as I build towards a unification fight so I can't afford to slip up against Uzelkov."

Cleverly, 25, from Cefn Fforest, has made title defences against Aleksy Kuziemski, Tony Bellew and, most recently, Tommy Karpency in February.

That last defence also took place in Cardiff and Cleverly is looking forward to facing WBO Intercontinental champion Uzelkov - whose nickname is Steel Power and has 27 wins from 29 fights with 16 stoppages - in the Welsh capital.

"I had a brilliant reception at the Motorpoint Arena in February, which was my first fight in Wales for over four years, and the fans came out to support me," Cleverly added.

"So it's great to return again for another big fight night in the capital."

"It's proved frustrating as we had Hopkins lined up and then he pulled out and Shumenov didn't want to come over here to fight Cleverly, plus Froch and Bellew didn't want to know," Warren said.

"While we look to make these fights Cleverly has got to keep busy, as he hasn't fought since February and Uzelkov is a tough title defence for him."