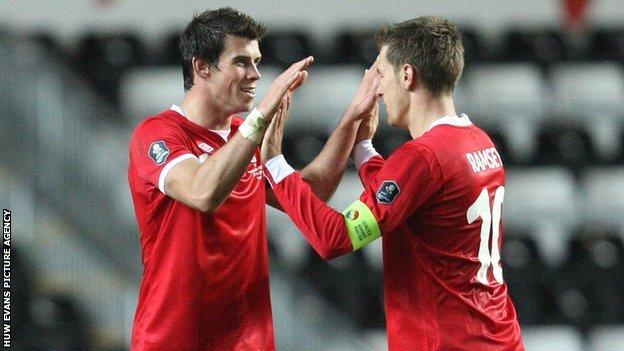 The label 'Golden Generation' has all too often been applied to sides who appear to be peaking just as Wales draw them in a qualification group.

Throughout the years, successive Wales teams have taken on - and ultimately fallen - to international teams who somehow produce a crop of talented players, hitting top form just as yet another (injury ravaged/multiple squad withdrawals/period of development - you add the term of your choice) Wales side face them.

Chris Coleman's side begin their Fifa 2014 World Cup qualification campaign this Friday against Belgium. Not a name synonymous with world-class football yet a country that can whack a big fat 'Golden Generation' sticker on their luggage as they arrive in Cardiff.

The Belgium squad contains no less than 10 players who ply their trade in the Premier League. Get ready to drool over the likes of Chelsea's Eden Hazard or Tottenham Hotspurs' Moussa Dembélé and watch how Manchester City's Vincent Kompany or Arsenal's Thomas Vermaelen control proceedings.

Sport Wales' Steffan Garrero has been to Brussels this week to meet their stars and to find out just how they have managed to cultivate so many leading players. He also caught up with man who pulled off arguably one of the most famous moustaches to have graced the Premier League - former Newcastle United defender Philippe Albert.

It is a daunting opening match, with Wales' current form only compounding matters. Since taking over from Gary Speed, Coleman's men in red have lost both matches he has overseen and, perhaps more worryingly, Wales have failed to register a goal in their last three internationals.

Sport Wales will be speaking to Coleman as he attempts to steer Wales to their first major championships since 1958. They're currently ranked in the world, five places behind Belgium, but once again will need to manufacture a competitive starting XI following the losses of key players such as Swansea defender Neil Taylor and Cardiff City's Craig Bellamy.

We will also look back at some of the classic Wales v Belgium encounters. The two sides have met on six previous occasions and Wales have won just twice, with Belgium triumphing on three occasions and just one draw.

A certain Ryan Giggs scored a delightful free-kick back in 1993, so we will dust off that footage from the archive and ask former Wales striker Iwan Roberts if he thinks Wales could repeat that 2-0 victory.

And what of our current generation? Is it golden or has the shine been taken off slightly following the passing of Speed? Wales have the likes of £15m Liverpool star Joe Allen, Arsenal's Aaron Ramsey and Tottenham Hotspur's Gareth Bale.

Ramsey and Allen had a taste of a major tournament with Team GB at the London Olympics. Will that have whetted their appetite? Sport Wales will take you inside the Wales camp and get the thoughts of the players.

And talking of London 2012, we will have the very latest from the Paralympics as once again Welsh athletes bring home the medals... now that really is a 'Golden' generation.