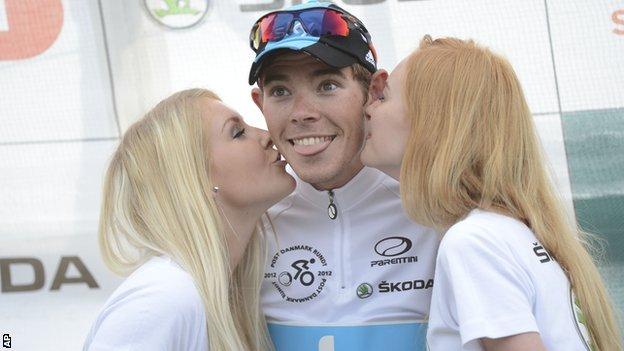 Three Welsh riders will take part in the Tour of Britain in which Bradley Wiggins returns following his Olympics and Tour de France success.

Cardiff's Luke Rowe, 22 joins Wiggins in Team Sky while Owain Doull, 19 and also from Cardiff, is part of a youthful British Cycling team.

Tour of Britain - where you can see Bradley Wiggins

They will be joined by Team UK Youth racer Yanto Barker, 32, who hails from Machynlleth.

Cardiff's Thomas, who was part of the world record winning team pursuit team at London 2012, has concentrated on the track rather than road racing since taking part in the 2011 Tour de France.

But, after what was likely to have been his track swansong, he is now working up his road skills again and currently competing in the Grand Prix de Quebec.

Meanwhile, Thomas's Team GB and Team Sky colleagues Bradley Wiggins and Mark Cavendish will be in action in the Tour of Britain, which begins in Ipswich on Sunday, 9 September.

Wiggins, the 32-year-old Olympic time trial and Tour de France champion had been rested by Team Sky following his cycling heroics of the summer.

But he will be back as of the effort to wrest the Tour of Britain title from Lars Boom of the Netherlands.

Rowe is also part of Team Sky for this event. He finished 14th overall in the recent Tour of Denmark, taking second place overall in the youth category.

One of the event's eight legs will take place in Wales with riders starting in Welshpool and ending in Caerphilly on Friday, 14 September.

Teenager Doull has been given a chance in the Tour of Britain as GB enter for the first time since 2008.

And having been the best British Tour of Britain finisher - ninth in 2004 - 32-year-old Barker returns for the first time since 2005.

Meanwhile Swede Magnus Backstedt, 37, who lives in Pontyclun, lines up alongside Barker having last taken on the Tour of Britain challenge in 2008 and is back after taking a break from competitive racing.

Backstedt returns as part of the Team UK Youth owned by former Formula One racer Nigel Mansell and managed by Nigel's son Leo.