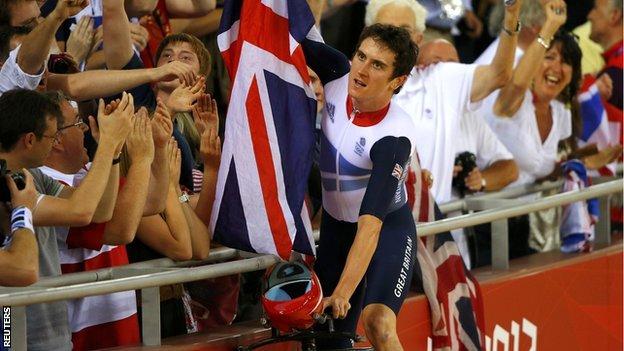 I have not been picked in the Great Britain team for the road race World Championships in the Netherlands because I am not fully ready for it.

My main focus in 2012 was the team pursuit on the track, which resulted in winning the gold medal at the London Olympics - going from that to riding a 161.6-mile (260km) race over hills and stuff is quite a bit different, to put it mildly.

I have been speaking to head coach Shane Sutton for the last couple of weeks and on Thursday spoke to race coach Rod Ellingworth and said I did not want to put myself forward for selection for the road race.

I do not feel that I am at my best on the road at the moment. I could still go there and do a decent job but at the same time I would be on the start line thinking I might not even finish the race.

After the standards I have set over the past couple of years, what I expect to achieve in the big races has increased, and I do not really want to go to the Worlds, which is one of the biggest races on the calendar, not fully ready for it.

However, I will still ride for Team Sky in the team time trial. That race, which is for the professional teams and takes place on Sunday 16 September, is still in my favour.

Maybe if I had knuckled down straight after the Games and done four, five, six-hour rides, had been watching my diet and sleeping well, then I would have been in a lot better shape and could have ridden in the road race.

But there was no chance I was going to do that. There was so much pressure and hype in the build-up to the Olympics and now it is over it has been a massive release - I have been enjoying it and making the most of it.

There are some young riders going to the Netherlands for Great Britain and it is good for them to get the experience - they will do a good job.

The men's road race is a tricky one to call - there are so many good guys taking part and team tactics are always a bit different when national teams get together.

You look at the Spanish team and they have got five leaders in the eight or nine men that are riding, so that will be interesting to see how they work together - if they do work together.

Obviously Belgium's Philippe Gilbert has come into some really good form at the right time, winning two stages in the Vuelta a Espana, and he jumps out at you a bit.

It is a bit of a lottery really but if I had to pick someone then I would probably go with Gilbert, but Simon Gerrans of Australia has showed some really good form in Canada and Edvald Boasson Hagen - who I will be riding with for Sky in the team time trial but who will ride for Norway in the road race - will also be in the mix if he can stay healthy.

It is definitely going to be an exciting race to watch.

In the women's race I am pretty confident a Brit will be there or thereabouts because Lizzie Armitstead, Emma Pooley and Nicole Cooke are all world-class riders.

I think the course suits them all pretty well because it is pretty hard. It is quite undulating and that is pretty good for all of them, while Nicole and Lizzie both have a nice sprint for the finish as well.

I have seen tweets and photos from the Tour of Britain and looks like it was a great day in Wales on Friday, from Welshpool to Caerphilly, with huge crowds supporting the riders.

This was Bradley Wiggins's homecoming - what he has done this year has just been phenomenal - so it is obviously disappointing to see him have to pull out because of illness.

I am sure both he and the fans will be disappointed but that is just the way it goes sometimes.

World champion Mark Cavendish is still in there and he will be hoping to finish on a high in his last few days in the rainbow jersey.

There is talk that he may leave Sky. It is great to have the fastest sprinter in the world in your team and it is disappointing to see him go, but at the same time you can fully understand his reasons.

Cav has got that all-time record of Tour de France stage wins at the back of his mind. He's a sprinter and he wants to win stages and you can't blame him for that.

I've heard the rumours that Jonathan Tiernan-Locke might join Team Sky from Endura, he is a great little rider and if he does end up coming it would be great to have him in the team.