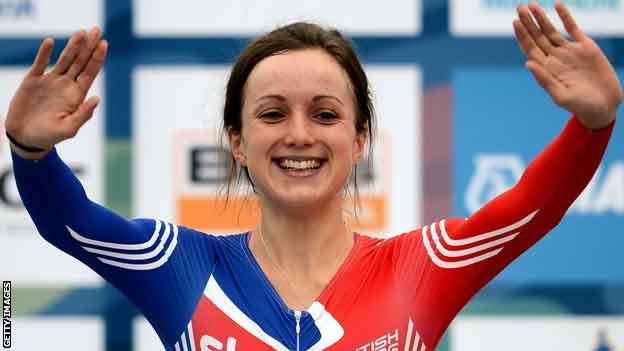 "I am ecstatic. I am really happy with my result," said Barker.

"I have come second so many times so it feels really good to finally get a rainbow jersey.

It is about the development in the next couple of years. Her focus has to be the Rio Olympics and making that team in Rio

"I haven't had chance to speak to my family yet, but have received so many texts and tweets from everyone. The support has been amazing"

Barker, who took silver in 2011 and won the 2012 European pursuit crown, said the course, with several climbs, had suited her.

She will move up to the senior ranks after Friday's road race in Limburg.

"It's hugely exciting. Racing with the juniors is great but as a senior I will get to race the best senior women in the world. I can't wait for it," she said. "I will race my hardest and see what happens."

Darren Tudor, head coach at Welsh Cycling, believes Barker's long-term aim will be to represent Britain at the Rio Olympics in 2016 and compares her favourably to Laura Trott, double gold medal winner in London.

"It is about the development in the next couple of years. Her focus has to be the Rio Olympics and making that team in Rio," said Tudor.

On her win in Limburg, Tudor said: "It's something she has worked towards all year. We knew the potential but you never know with juniors."

He added her time was the second fastest ever by a British girl, not far behind Trott. "Laura did go faster but it is comparable," he said. "People have a right to compare them."

He said Barker had enjoyed a fantastic year, gaining experience on the road and track.

"She became European individual pursuit and team pursuit champion in Portugal and picked up a collection of medals at the World Junior Track Championships in New Zealand last month," he added.