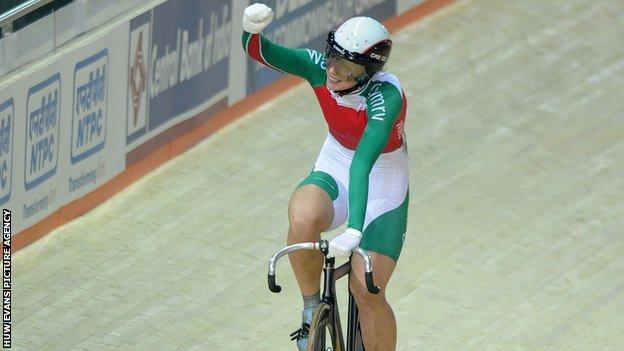 Cycling star Becky James has hailed the creation of a Welsh track team.

The 2010 Commonwealth Games silver and bronze medallist, 20, believes the move will help the nation's emerging talent.

"It's the only trade team in Wales so it gives a lot of... riders who maybe wouldn't get the chance to ride for Great Britain yet a good chance to go out and get some racing," James said.

"It's great for Wales and great for all the youngsters coming up. It will get them involved with all the major events.

"You've seen through the Olympics some of the Welsh riders doing so well and there's a lot of young riders coming through like Eleanor Barker, Amy Roberts and Owain Doull.

It's been a tough year for me with injuries and illness

"They're all so talented and it'll be great for them to get the experience racing with a lot of the senior riders, because it's a big step up from junior to senior."

James has had an injury-disrupted year but says she is getting back to her best as the Abergavenny product prepares to defend her British Keirin and Sprint titles this week in Manchester.

"It's been a tough year for me with injuries and illness but finally I've had a big block of training without any [problems]," James said.

"I'm focusing on doing well in all of my events but my important ones are the Sprint and Keirin in the individual events, and I'm also riding the team sprint with my older sister [Rachel] and looking forward to seeing what we can do there.

"She's been training the past year and I haven't had any chance to ride with her, so it should be good the first time racing together."

The new Welsh Cycling team will compete at UCI Track World Cups 2012-13 in Cali in Colombia, Glasgow and Aguascalientes in Mexico, while also aiming to prepare riders for the 2014 Commonwealth Games in Glasgow and the 2016 Rio Olympics.