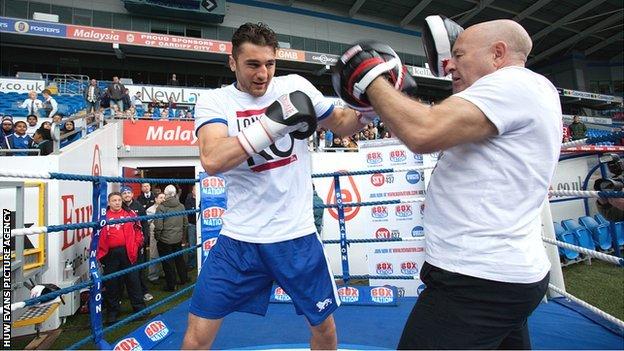 The 25-year-old Welshman will make his fourth title defence against Ukrainian Vyacheslav Uzelkov at Cardiff's Motorpoint Arena on 27 October.

But after that Cleverly is aiming to fight at the home of Cardiff City Football Club who he supports.

With a passionate Welsh crowd, it would be a great venue for boxing

"I'm pretty sure we can get a great world title fight here this summer, that's the target," Cleverly said.

"I spoke with a few of the guys here at the stadium and they seem ready to go for it.

"It would be a great atmosphere, a brilliant stadium and I'm sure we'd have a great crowd.

"I think the chances are very likely, it's a big possibility.

"I come down to Cardiff and support them on their home games in and around training, and they've shown me great support as well."

Cleverly was speaking at a specially-arranged open training session at the football stadium, which can hold more than 26,000 fans.

Assuming Cleverly sees off Uzelkov, his promoter Frank Warren is likely to continue his pursuit of the likes of American great Bernard Hopkins and WBA light-heavyweight champion Beibut Shumenov, who have turned down previous approaches.

The promoter has said his attempts to persuade IBF super-middleweight champion Carl Froch to fight at a catch-weight have also been rebuffed.

Whoever Cleverly finally manages to entice, he has a venue ready to play its part.

"We'd be delighted to put the fight on if we could," said Cardiff City chief executive Alan Whiteley.

"We had initial discussions with Frank Warren Promotions earlier this year but time was against us.

"But we've made no secret of our desire that we want this to be a sporting stadium. We want to attract great events for the city.

"With Nathan Cleverly being a Welsh boxer and a Cardiff City fan, I think that would fit the bill on all accounts.

"With a passionate Welsh crowd, it would be a great venue for boxing."