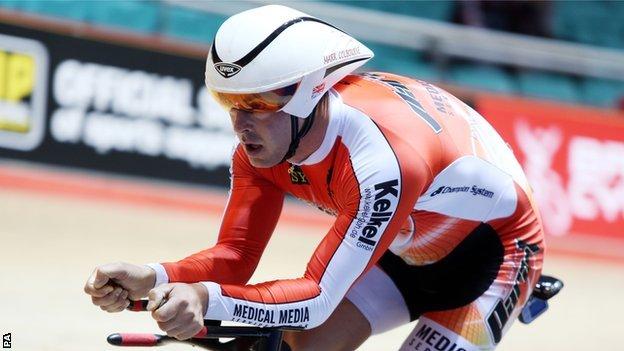 Colbourne triumphed in the 200m flying start time trial, finishing in 14.177 seconds, comfortably inside the previous record time of 14.875sec.

He broke the world record twice in a day as he claimed C1 3km individual pursuit gold at London 2012.

It also made up for the disappointment on day one when Colbourne was forced to settle for silver in the paracycling time trial, with visually impaired Sophie Thornhill, piloted by Megan Boyd, taking the win.

Another Paralympic champion, Jody Cundy, had to settle for fourth in the able-bodied kilo, behind winner Kian Emadi, who finished in a time of 62.435sec.

George Atkins won the men's points race, finishing with 64 points ahead of Colbourne's Welsh compatriot Owain Doull (59) and Zac May (53).