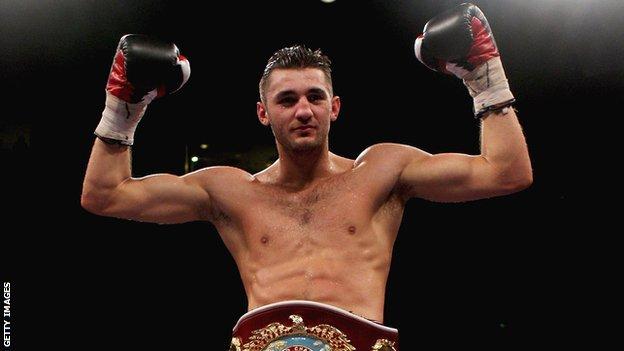 Nathan Cleverly says he has no regrets over choosing to fight in America despite confusion over his opponent.

The Welshman still retains a slim hope that Ryan Coyne can resolve his contractual dispute with former agent Don King and face him on 10 November.

Any replacement for Coyne would have to be among the WBO's top 15 for Cleverly to defend his light-heavyweight title.

"As long as we fight in Los Angeles and put on a good show, then that's number one for me," Cleverly said.

"The worst-case scenario would be fighting a 10-round fight with my belt not on the line.

"The WBO have made that statement, top 15, but we're trying to find an opponent who's ready and who's willing to fight."

Although Coyne is not ranked in the WBO's top 15, Cleverly confirmed that if the American could bring his court case with King to a speedy resolution then their fight would be a world title defence.

"My opponent looks like it's going to change now; it's not a definite yet, he [Coyne] is in court on November 1st so the fight could still go ahead," Cleverly said.

"But we've got a few other names lined up and most importantly I'm ready to fight and whoever's in the other corner, let's go."

The promotion at the Staples Center is one the Cleverly camp still hope will impress a wider North American audience and lead to unification fights.

His promoter, Frank Warren, is seeking a replacement challenger of sufficent calibre to ensure Cleverly secures some much-needed American exposure, as US television may not be interested in a non-title fight.

"This opportunity, I've got to take it with both hands," added Cleverly, who cancelled a bout in Cardiff with Ukrainian Vyacheslav Uzelkov, ranked seventh in the WBO's current table, in order to face Coyne in the United States.

"This is an opportunity to jump to that next level in my career, so when the offer came I had to take it."

German Robin Krasniqi is the mandatory challenger in the WBO rankings. A meeting with Cleverly was scuppered in April when the 25-year-old champion

Krasniqi's fellow countryman Juergen Braehmer, currently second in the WBO rankings, pulled out of a in May 2011.

Cleverly has not fought a 10-rounder since he became British and Commonwealth champion in October 2008 and his father and trainer, Vince, concedes a non-title bout would not be ideal.

"He has trained hard for a 12-rounder and desperately wants a world title fight," said Cleverly Sr.

Cleverly is set to leave for Los Angeles on Wednesday and Warren hopes to have a new opponent confirmed before his fighter embarks on his journey to California.