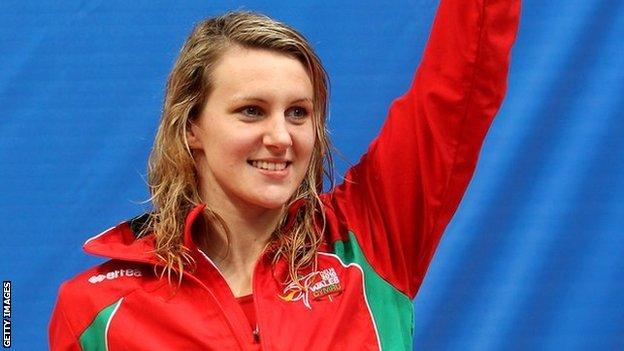 Welsh swimmer Jazz Carlin says failing to qualify for London 2012 has made her more determined to succeed in future.

Carlin is in the British team for the World Short Course Championships in Istanbul on 12-16 December.

The Commonwealth Games medallist sees selection as a first step on her rehabilitation after missing out on the Olympics.

"I've come back with a new attitude and a fresh motivation," she said.

The Swansea-based athlete won bronze in the 400m freestyle at Delhi 2010 but went one better and claimed silver in the 200m freestyle in a Welsh record time.

But a catastrophic loss of form saw her fail at the Olympic trials in March and also miss out on a second chance to qualify at the National Championships in June.

"Having to watch the Olympics and not be part of it was really difficult," she said.

"I haven't got any regrets. I worked as hard as I can.

"Even though it was really tough it just proves my strength of character that I just want to get back to the best I can. I know there's still more to come from me.

"There's no prouder honour than representing your country and hopefully there's more to come.

"Short course isn't one of my strengths. It's just getting out to race is the most important thing," she said.

Carlin is one of four Welsh swimmers selected for the World Short Course Championships, joined by Jemma Lowe, Georgia Davies and Ieuan Lloyd in the 19-strong team.