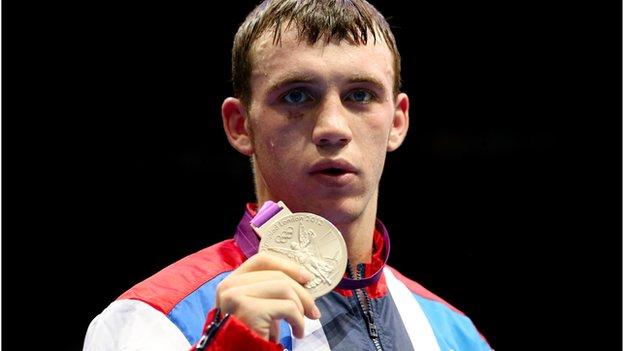 The GB amateur team, known as the British Lionhearts, will welcome Italy's Italia Thunder to the Celtic Manor in Newport on 23 November.

The WSB is a new 12-nation tournament for amateur boxers.

Bouts will be over five three-minute rounds instead of the usual three, and boxers will not wear the customary protective headgear and vests.

Run by amateur boxing's governing body, International Amateur Boxing Association (AIBA), the WSB series guarantees that boxers will retain their Olympic eligibility for the Rio de Janeiro Games in 2016 despite being paid to compete.

London 2012 silver medallist Evans became only the second Welshman to win an Olympic boxing medal when he lost to in the welterweight final.

World Championship silver medallist Andrew Selby, who also took part at the Olympics, has also been confirmed for the WSB series and is set to move up to fight at bantamweight.

The British Lionhearts will face the United States in California in their opening fixture on 15 November before hosting Italy at the Celtic Manor, host venue of golf's 2010 Ryder Cup.

They will also take on Kazakhstan, Germany and Ukraine, home and away, in Group B.

The Lionhearts's World Series of Boxing team will be launched in London on Tuesday.