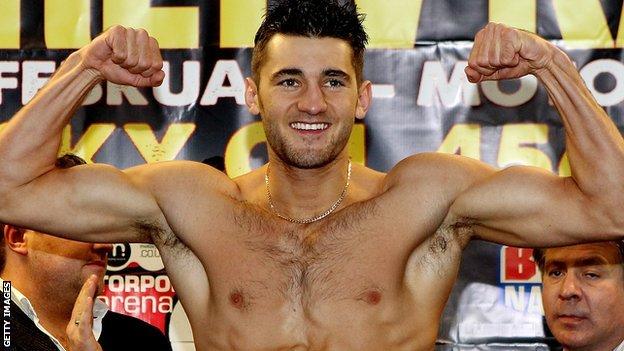 The 28-year-old American stepped in at the last minute following Ryan Coyne's withdrawal as Cleverly makes the fourth defence of his title, but first in the United States, on Saturday.

"Hawk is a tough and strong come-forward fighter," said Cleverly.

"But one I think I can look good against him.

"The build-up to this fight has not been ideal as it is not only a change of opponent but we've gone from a southpaw to an orthodox fighter.

"Thankfully the fight is going ahead, although it is not an ideal situation, so I've just got to get on with business, enjoy the moment and perform.

"The whole idea of coming to America was gaining some US exposure and to make a statement."

Cleverly understands to secure the big fights in a competitive light-heavyweight division he must impress American television companies and convince them to finance a showdown with one of the division's other champions.

The 25-year-old has been training at the famous Wild Card gym in Hollywood, watched by Hall of Fame trainer Freddie Roach.

I have the buzz for Saturday, everything feels good

Hollywood actor Mickey Rourke, Oscar-nominated star of The Wrestler, has become a "personal friend" as Cleverly and his coaching team have been socialising with the former boxer at his Beverly Hills villa.

Rourke and Welsh singer Sir Tom Jones have agreed to carry Cleverly's belt into the ring at the Staples Center before the bout with Hawk.

"That's a nice touch from Mickey and Tom," acknowledged Cleverly. "Mickey said it was a privilege and an honour and for those to want to do it, it will be a really proud moment for me.

"Their involvement will also help me get exposure, which is the reason that I wanted to fight in the States.

"I feel good, the training has gone well and I really have the buzz for Saturday night, everything feels good."

Hawk has a decent domestic reputation in the United States but the man with 23 wins from 26 fights is a huge underdog for Saturday's match-up.

But Cleverly insisted: "Hawk is going to be dangerous.

"He has a big opportunity by coming in late for a world title shot and has nothing to lose but if I perform, I will deal with him."