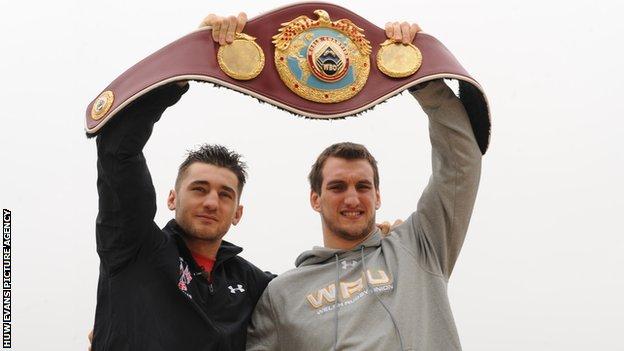 For Wales' rugby players, it is the comfort of competing in familiar surroundings with ample past experience of the challenge confronting them.

For Wales' leading boxer, it is a step out of his usual comfort zone to face an opponent he admits he will have to research on the internet to determine what he is all about.

Two contests this weekend - previewed extensively on Friday's Sport Wales - that underline how sport is as much about the completely unknown as the familiar.

On Saturday afternoon Wales and Argentina collide for the 14th time in the opening match of the autumn international series at the Millennium Stadium.

Not what you might call regular foes, but there has been enough meetings between the two nations in recent years for Wales to have a pretty clear idea what they are up against.

Nathan Cleverly, on the other hand, said he would have to go online to familiarise himself with the little-known American who will try to steal his WBO light-heavyweight crown in Los Angeles.

Some last-minute homework was required after Cleverly's original opponent, Ryan Coyne, pulled out due to contractual complications and in stepped Shawn Hawk.

So, how has Cleverly dealt with all the disruption as the world champion prepares for his first major fight on foreign soil?

Cleverly swaps his usual Bargoed training base for Santa Monica Beach to tell us how he hopes a fourth successful defence of his world title will raise his profile Stateside.

Sport Wales also has exclusive access to the Cleverly camp as he attempts to crack America. And what boxing preview would be complete without a few words from… Hollywood actor Mickey Rourke?

The Oscar-nominated star - something of a big-screen warrior himself in films such as Sin City and The Wrestler - has forged a friendship with Cleverly's old stablemate Joe Calzaghe while spending time in Wales researching his new film about Welsh dual-code rugby international Gareth Thomas.

Now the friendship extends to Cleverly and Rourke, a boxing fanatic, will carry the Welshman's light-heavyweight belt into the ring ahead of Saturday's show. Proving that, whatever might be missing from the sport of boxing at the moment, the traditional element of showbiz and razzmatazz hasn't been lost.

Before the rugby might of Australia and New Zealand pitch up in Cardiff later in the series, Argentina provide the curtain-raiser on a series of testing autumn showpieces.

The Pumas team Wales face at the Millennum Stadium are confident they could not be much better prepared to take on Rob Howley's side having been together for the past three months.

The last time the two sides met, in a 2011 World Cup warm-up match, Wales ran out 28-13 winners but there are signs that something is stirring.

Since that defeat in Cardiff last year the Pumas have won eight of their 17 internationals, and put up a creditable performance in this year's inaugural Rugby Championship, drawing with South Africa and twice running Australia close.

We go inside the Argentina camp to hear from talisman Felipe Contepomi and coach Santiago Phelan as they prepare to face a Wales team for whom a successful series would help their seeding for the next World Cup draw, which is made at the start of December.

From the home team we will hear from Jamie Roberts, Rhys Priestland and skipper Sam Warburton. There will also be a few words with Howley, as he looks forward to what he hopes will be his first win as caretaker coach after the three defeats on tour in Australia in the summer.

And, ahead of the World Track Cycling Championships in Glasgow next week, Sport Wales profiles the next generation of Welsh track cyclists primed to follow in the slipstream of current field leaders such as Geraint Thomas and Becky James.

We will hear from the team pedalling for Wales in Scotland - Jon Mould, Ciara Horne, Amy Roberts and Elinor Barker - as we examine what it takes to be successful in the sport.