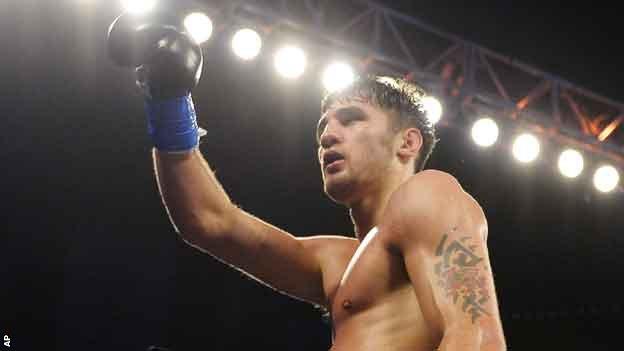 Cleverly, 25, retained his title with an impressive eighth-round stoppage win over American Hawk in Los Angeles.

Former multiple-weight world champion Hopkins has confirmed he will return to the ring on 9 March in New York.

"I've had some very interesting conversations with Nathan's promoter Frank Warren and Bernard is open to that possibility.

"Bernard will have to face one of the world champions and Nathan Cleverly is one of them - and Bernard says he doesn't care who is going to fight as long as they are a world champion.

"Bernard will be looking at the other two champions as well as Nathan and we'll speak with the promoters to see where we can get the best deal.

"Hopkins brings the name, aura and money. He is the legend and everyone wants to fight a fighter like that."

American Hopkins, who lost to Welshman Joe Calzaghe on points in Las Vegas in April 2008, has not fought since losing his WBC light-heavyweight title in a rematch with Chad Dawson at Atlantic City's Boardwalk Hall in April.

Now the 47-year-old multiple-weight world champion, who wants to break his own record and become boxing's oldest world champion, hopes to regain some honour against either Cleverly, WBA title-holder Beibut Shumenov or IBF champion Tavoris Cloud.

Unbeaten American Cloud makes a fifth defence of his title against Karo Murat in Caracas on 24 November.

Cleverly extended his unbeaten record to 25 fights with a fourth successful WBO title defence at Staples Center on Sunday.

The WBO sanctioned the bout against an unranked opponent as long as the Welshman makes a mandatory world title defence against the WBO's number one challenger Robin Krasniqi, probably in Germany, within 90 days of outclassing Hawk.

"There have been talks for a while about the possibility of Bernard Hopkins," said Cleverly.

"Hopkins is a great fighter who is coming towards the end of his career while I'm a young world champion - so that will be a real interesting fight and I'd love a shot at Hopkins."

Cleverly, normally a headline act in the UK, was down the card here in LA as his fifth fight slot was at 5pm - but crucially it was on American television.

And Golden Boy Promotions chief executive Schaefer insists whether Cleverly fights Hopkins or not, they want him to return to the lucrative United States market on a regular basis.

"He has proved he is a name in the light heavyweight division to be reckoned with and I can't wait to have him back her in the very near future.

"Nathan is maybe the most exciting fighter in the division - and the American public now know that Nathan Cleverly is a name in the mix here in the United States.

"It was great seeing Sir Tom Jones and Mickey Rourke carrying his belt into the ring and that would have helped his popularity - everybody loves a bit of Hollywood flair.

"Nathan is young, good looking and has a great future but it is important he remains active here in the United States and not make it just a one-off."