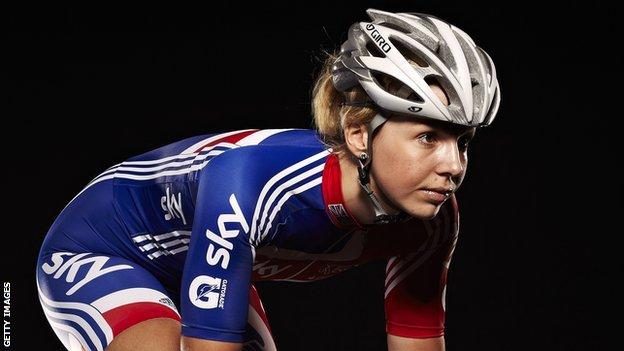 Welsh cyclist Becky James put her gold medal-winning performance at the track world cup in Glasgow down to hard training during the Olympics.

James missed out on London 2012 after a season wrecked by injury and illness.

She teamed-up with Olympian Jess Varnish in Glasgow to win gold in the team sprint.

"While they were at the Olympics I did a lot of training with the boys, that sort of brought my performance on quite a lot," said James.

Following her success in Glasgow, James is flying to Australia as she steps up her preparations for the World Championships in Minsk at the end of February.

James told Radio Wales she was delighted with her performance in Glasgow.

"I didn't really know what to expect," she said.

"It was such a high-performance field that was racing, to come away with two medals and a PB in the team sprint with Jess and just to be able to get the chance to race with Jess... it was great to get racing with her again and I'm really chuffed with my performances."

The success came at the end of a season which saw James' Olympic hopes dashed by injuries and illness.

Her Olympic hopes appeared bright after James won a silver and bronze medals for Wales in the Commonwealth Games in Delhi in 2010.

However, she suffered food poisoning following a World Cup event in Kazakhstan in November 2011, then picked up an Achilles injury in December 2011 before having to have her appendix removed in January 2012, which finally put paid to her hopes of competing in London 2012.

"Once I found out [I was missing the Olympics] it was upsetting more than anything," said James before the Glasgow event.

"Then, after I accepted it, I just got back into training and while watching the Olympics it was motivating my training and me thinking just how much I want to be there one day.

"I was just training with the boys constantly, which they just really pushed me on and I think that's helped my training and performances recently.

"So it was probably one of the most frustrating times of my life to see everyone do so well but it was just inspiring really."

Now James is determined to establish herself as a key member of the British track cycling team by honing her partnership with Varnish.

"Hopefully over the next few months up to the world championships we'll [James and Varnish] be riding together and... trying to perfect our performance, so hopefully it will gel us together that little bit more," she said.

The Welsh star will miss the next round of the track world cup in Mexico to concentrate on preparations for the World Championships in Belarus.

"I'm off to Australia on Wednesday [21 November] for a month of training.

"It should be a good bit of nice warm weather and that will help my training right up until 23 December, and I'll be home for Christmas then."