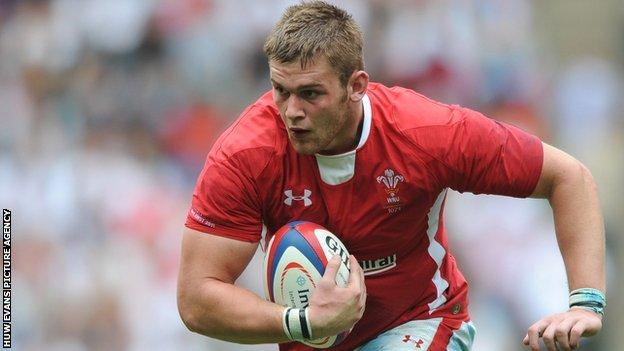 Dan Lydiate was a key performer as the Wales rugby union team claimed a third Grand Slam in eight years.

The Newport Gwent Dragons blind-side flanker was also named the Six Nations player of the tournament for his performances during the campaign.

After the highs of the Grand Slam campaign, Lydiate was brought back to earth when he fractured his ankle in September in the Dragons' RaboDirect Pro12 win over Edinburgh.

While the injury ruled the 24-year-old out of Wales' autumn Test series there is a chance Lydiate could return for the end of the 2013 Six Nations and prove his mettle for the British and Irish Lions tour to Australia next June.

Although born in Salford, Lydiate was raised on the family farm in Llandrindod Wells and his budding talent was soon recognised as he was snapped up by the Dragons academy side.

Lydiate was an ever-present member of the Wales Under-20 back-row for their 2007 Six Nations campaign and broke into the Dragons' senior side at the end of that season.

Early in the 2007/08 season during a Heineken Cup match against Perpignan, Lydiate suffered a serious neck injury which threatened to end his fledgling rugby career.

But the then 19-year-old battled back to fitness and form and the following season made his international debut.

Lydiate won his first Wales cap in the 2009 autumn international series when he came off the bench against Argentina at the Millennium Stadium, then a week later made his first start for his country against Australia.

The 2010/2011 season saw Lydiate firmly established in the Wales side and was one of the stand-out players - despite struggling with an ankle injury - as Wales reached the semi-finals of the 2011 Rugby World Cup.

Wales made up for their disappointment at missing out on the World Cup final by winning the 2012 Six Nations, sealing the Grand Slam with a thrilling win over France at the Millennium Stadium.

"To be part of such a talented Wales team and win the Grand Slam in Cardiff was incredible in itself but to then be voted player of the championship [was] absolutely unbelievable," Lydiate said.

"I looked at the trophy - you have Shane Williams and Brian O'Driscoll on there. Legends of the game... it's a massive honour."