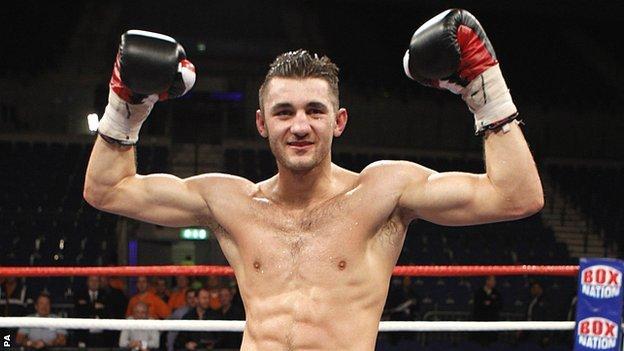 Boxer Nathan Cleverly has grown in confidence and stature in 2012 with impressive defences of his WBO light-heavyweight title against difficult American opponents.

The undefeated 25-year-old from Cefn Forest handed Tommy Karpency his first defeat with an unaminous points decision in February 2012 in Cardiff.

Cleverly then made the trip to Los Angeles in November to end the challenge of Shawn Hawk in the eighth round, improving the Welshman's record to a perfect 25 wins from 25 fights.

That was the first defence Cleverly had made abroad, and just the second time he had fought outside Britain, as he sought to capture the imagination of American boxing fans.

"I've enjoyed the experience and feel I made the most of a great opportunity of fighting in the States," Cleverly said.

"I got some good exposure on American TV and I think the crowd enjoyed the fight. They booed me as I went in but some fans gave me a standing ovation when I left the ring, which shows my exciting style can win people over here.

"It is an exciting time for me. This proves I'm ready for the States, I just hope their best fighters are ready to fight me."

Cleverly was a talented all-round sportsman during his school years at Blackwood Comprehensive,winning the Under-15 Welsh cross-country championship and being a keen footballer.

But the lure of boxing proved strongest and six consecutive Welsh amateur titles followed before Cleverly turned professional, making his debut in July 2007 with a four-round victory over Ernie Smith in Edinburgh.

Although having joined the pro ranks, Cleverly still continued his studies and graduated from Cardiff University with a mathematics degree in 2010.

In 2008 Cleverly won the vacant Commonwealth title with a points victory over Tony Oakey, then added the British title by stopping Danny McIntosh the following year before capturing the European title in 2010 by knocking out Antonio Brancalion.

Later that year, Cleverly came through a world title eliminator and won the interim WBO belt against Nadjib Mohammedi.

A fight against reigning champion Juergen Braehmer was set to go ahead only to be derailed first by the German's court case for assault and then Braehmer's eye injury.

Cleverly was eventually awarded the WBO belt by default and set about proving he was a deserving champion with defences against Aleksy Kuziemski and British rival Tony Bellew.

After a successful 2012 with two more defences, Cleverly has raised his profile in America and plenty more attention is likely to folow.