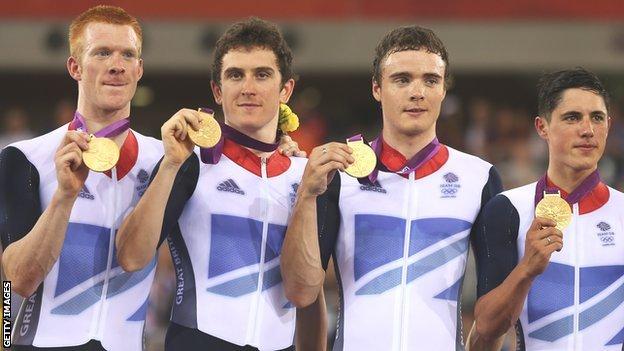 It capped a great year for the Welshman and his team-mates Edward Clancy, Steven Burke and Peter Kennaugh as the quartet also won that year's World Championships in Melbourne, Australia.

"It was a lot of sacrifice, I missed a lot on the road and put all my eggs in one basket... the Olympics was everything," Thomas said.

"It started from October last year; I finished the road season and was straight on to the track to build up to the Games.

"Everyone was talking about it [London 2012], for years it felt like, and in the team pursuit we were all there together and talking about [winning] for months on end.

"To finally get there and produce the goods on the day was amazing... it feels so surreal now."

Thomas won National Championships at Under-14 and 16 level and served notice to the wider cycling world of his talent by winning the Junior World Championships and Paris-Roubaix in 2004.

That year also saw him win the Carwyn James Junior Award at the 2004 BBC Wales Sports Personality of the Year.

In 2005 Thomas suffered a serious set-back when he needed his spleen removed after a crash in Australia, while another bad fall in a time trial in Italy in 2009 saw him break his pelvis.

Thomas made his Tour de France debut in 2007 - where he was the youngest rider - becoming the first Welshman in 40 years to ride in the Tour, while on the track as part of Great Britain's team pursuit triumphed in the World Championships in Mallorca, Spain.

The following year he set road racing aside as Great Britain's team pursuit quartet achieved a notable track double by winning gold at the 2008 World Championships and Beijing Olympic Games.

Thomas was appointed an MBE in the 2009 New Year's Honours List and won the British National Road Race title in 2010.

In May 2011, he celebrated his first professional road win in the Tour of Bavaria and the now Team Sky rider wore the white jersey for the top young rider for seven stages during the 2011 Tour de France.

This year saw Great Britain's team pursuit again achieve the impressive double of World Championship and Olympic titles, although Thomas is now set to dedicate himself to road racing after the track success of London 2012.