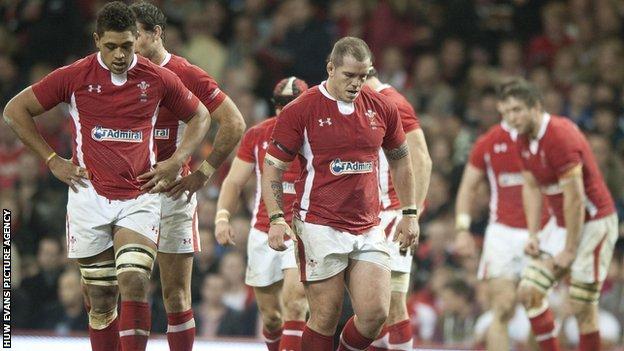 It has been an autumn of discontent so far for Wales - and there will be a certain symmetry to their poor run of results if Australia waltz off with a win in the final match of the series.

It was against the Wallabies on their summer tour that Wales' woeful sequence of six successive defeats began.

Defeat number seven against the same opponents would, on the face of it, suggest Wales have made little progress since venturing Down Under confident of claiming that elusive southern hemisphere scalp on the back of another Six Nations clean sweep.

The Grand Slam champions ended up losing all three of those tour matches.

More Millennium Stadium misery on Saturday - to add to those against Argentina, Samoa and New Zealand - would also see Wales drop out of the top eight in the International Rugby Board Rankings, potentially leading to a much tougher draw for the 2015 Rugby World Cup when it's made next Monday.

Doom and gloom. So what reasons for hope as Wales seek to salvage their status in world rugby as well as wounded pride? Sport Wales reports from the home camp once again as we ask players and management whether the pressure to end the autumn series on a high can inspire their first win over a southern hemisphere heavyweight since Australia were beaten in Cardiff in 2008.

We also bring you the verdict from an Aussie side who responded to defeat against France earlier in the month by seeing off England and Italy.

Our football focus switches to a sinner-turned-saint enjoying life in the Blue Square Premier as former Wales international David Pipe tells us he is on the road to redemption after serving a prison sentence for wounding with intent to cause grievous bodily harm.

Pipe was once part of a promising crop of Wales Under-21 internationals bubbling beneath the senior surface during the Mark Hughes era. He also picked up one full Wales cap.

But, while on the books at Bristol Rovers, he put his career in jeopardy when he was jailed for 38 months for smashing a bottle over the head of a man outside a Bristol nightclub in 2010.

After serving half of his sentence, he was offered the chance to resurrect his career with Newport County. And he took it.

Last season Pipe, from Caerphilly, played a key role in Newport's successful battle against relegation from the Conference as well as their journey to the FA Trophy Final before manager Justin Edinburgh handed him the captain's armband in the summer.

As Cardiff City look to consolidate their position at the top of the Championship, we will also preview former Bluebirds manager Dave Jones' first return to the capital since he was sacked in 2011.

Jones repeatedly put Cardiff within touching distance of the big time during his six years in charge without quite managing to get them over the line, so will he be warmly-welcomed or generally cold shouldered by home fans when he brings his struggling Sheffield Wednesday side to south Wales?

Plus, can Swansea win at the Emirates? Michael Laudrup's men travel to Arsenal still looking for their first Premier League away win over one of the traditional big four sides.

Away from the pitch, we are in the ring with Olympic boxers Fred Evans and Andrew Selby as the Olympic boxers make a Newport homecoming in front of boxing legends Joe Calzaghe and Barry McGuigan.

It was thought Evans, who won a silver medal at London 2012, and Selby would turn professional after the success of Team GB at the Olympics.

But a new World Series of Boxing concept allows them to retain their amateur status while enjoying all the perks of professionalism.

Shining a light on the new venture, our reporter Steffan Garrero went behind the scenes with the pair - and got some expert opinion from McGuigan - as they fought for the newly-formed British Lionhearts team at Newport's Celtic Manor.