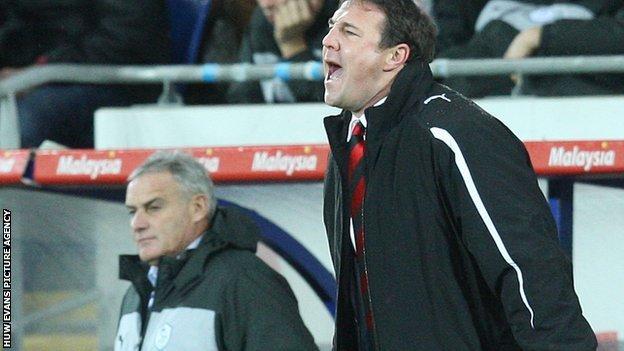 Manager Malky MacKay says the role of Cardiff City's fans should not be underestimated in his side's record-breaking home run.

Cardiff's 1-0 win over Sheffield Wednesday was their 10th straight league victory at Cardiff City Stadium, taking them to the top of the table.

"They create an atmosphere that means teams come here and be tentative," said Mackay of the fans.

MacKay believes the supporters are reacting to the team's hard work and persistence, which was in evident on Sunday when it took 80 minutes to break down struggling Sheffield Wednesday.

Scottish wing Craig Conway's first goal of the season finally breaking the resistance of the visitors, who are now managed by former City boss Dave Jones.

"There's a commitment and determination at this football club with a good ethic and hard work and that won't change," said MacKay.

"To do that and come away with so many home wins is very pleasing, especially for the fans.

"They've been great to me since the first day I arrived, and I think what we're seeing is players that are sweating for the jersey.

"If they see that fans will accept mistakes, but what they've seen is good football here.

"They've seen goals, not many goals conceded and a team that are on a roll with momentum - and they're joining in."

MacKay, who succeeded Dave Jones as Bluebirds boss in the summer of 2011, added he was happy that the Sheffield Wednesday manager was given a respectful reception on his first return to the Cardiff City Stadium.

"I'm delighted about that," said MacKay.

"Dave was here for six years and I would hope there's a fondness attached to good times here.

"You know he had good times here and I hoped he's be given a warm reception and I think he was."

Jones's six years in charge were the most successful in recent times. He led the Bluebirds to the FA Cup final in 2009 and the Championship play-off final in 2010.

Cardiff lost on both occasions, but Jones believes the club now has what is required to gain promotion.

"They've got to go up because they've spent a fortune," he said after his side's defeat on Sunday.

"I don't know what the wage bill is. The problem is they've probably got six or seven other clubs that can match them."