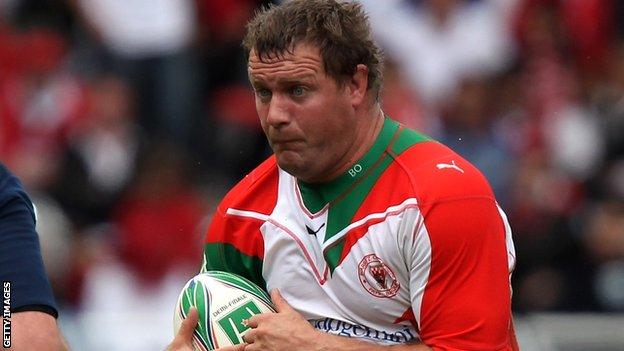 The Ospreys have recruited former New Zealand prop Campbell Johnstone in a bid to ease their front row injury problems.

The former Crusaders and Biarritz tight-head has signed until the end of the season.

"Campbell will go straight into our ERC squad on his arrival," said Andy Lloyd, the Ospreys' rugby operations manager.

Ospreys have already recruited Cai Griffiths on for the rest of the 2012/13 campaign as well as signing versatile Moldovan international front rower Dimitri Arhip.

Jones and Aaron Jarvis, who is out for the rest of the season, have knee injuries while Rees is recovering from neck surgery.

"The arrival of Campbell and Cai gives us some much-needed options at tight-head given the injuries we've suffered and the ongoing commitments we have to the national set-up at senior and age-grade level," added Lloyd.

A product of the Canterbury province, Johnstone played 38 times for Crusaders before signing for Biarritz in 2008.

Renowned as a powerful scrummager, Johnstone played 80 games for the French outfit in four years, including 14 appearances in the Heineken Cup.

In the 2009/10 season he faced the Ospreys in the quarter-final clash in San Sebastian where Biarritz won by a solitary point on their way to thee final against Toulouse.

Capped three times by New Zealand in 2005, against Fiji and the British and Irish Lions (two tests), Johnstone left Biarritz in the summer, returning to New Zealand to play for Tasman in the ITM Cup.

The Ospreys insist they are still intent on development within the squad despite Johnstone's recruitment.

But they feel that with two big Heineken matches coming up against Toulouse they needed some experience.

"We remain entirely committed to development from within and don't take any decision to look outside the group for injury cover lightly," claimed Lloyd.

"However, we have a responsibility to our supporters, management and directors to remain competitive, as well as to our players for their personal welfare.

"Given the complete lack of any professional experience in our remaining options there is quite simply no way we could go the rest of the season without bringing in additional cover."