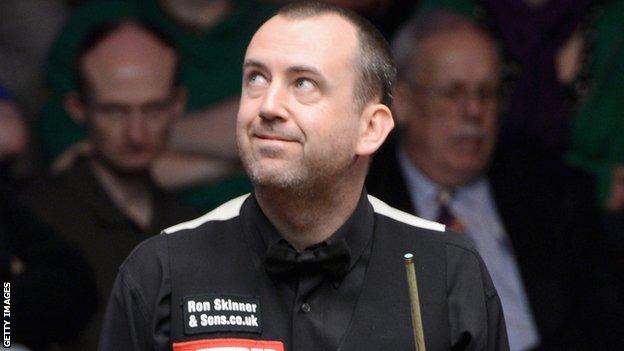 Welsh snooker star Mark Williams says he may give up the sport after a first-round defeat at the UK Championship.

The 37-year-old, a former world and UK champion, was defeated 6-3 by Mark King in York on Monday.

Williams is ranked number five in the world but said after his exit that he has to accept that he will probably never win the UK tournament again.

"Perhaps I should follow Stephen Hendry and retire. It's probably the best," said Williams.

"[I'm] just disappointed with the way I play. Because every time I play, I play that bad.

"I'm going to [have to] accept I'm not going to win it [the UK Championship] again."

Asked whether he was hopeful of his form returning in the future, Williams added: "It's just black. There is no light [at the end of the tunnel]."

Williams also lost at the first round stage of the International Championship in China in October, going down 6-4 to world number 20 Mark Davis.

Williams was the first left-handed player to win the World Championship in 2000, but he has had his fair share of controversy in the past.

Earlier in 2012 Williams tweeted he "hated" Sheffield's Crucible Theatre, the venue for the World Snooker Championship.

The Welshman claimed he would "rather play at Pontins" and hoped the tournament was switched to China.

The WPBSA, the sport's governing body, fined him £4,000 for April's outburst, which also included the use of a swear word on Twitter.'