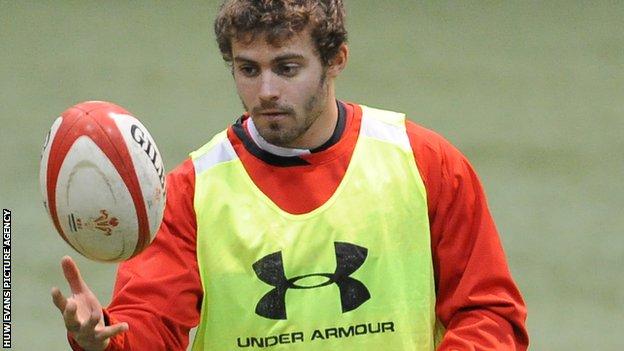 Same team, same result. What is it with Australia?

If the case of déjà vu and an eighth defeat on the trot against them was not enough, Wales were then handed a Rugby World Cup draw against them and England.

On this week's Sport Wales we will be speaking to one of the players who managed to shine in what was a rather dull autumn series for Wales.

While many of us were drowning our sorrows after Wales' seventh defeat in a row, Leigh Halfpenny was in hospital having scans on what looked like a very serious neck injury.

The Blues full-back left the Millennium Stadium pitch on a stretcher at the end of Wales' 14-12 defeat, he will be telling us about that and reflecting on the disappointing November.

In fact, such has been the disappointment of Wales' terrible autumn some within the squad have sought the help of a sports psychologist after losing confidence in the wake of "poor performances".

Wales fly-half Rhys Priestland was one of them while captain Sam Warburton is also a regular visitor to what is now known as a 'Mind Skills Coach'. Steffan Garrero takes a look into this relatively new craze to see if Wales' leading sports stars are mentally strong enough to succeed.

Goalkeepers are often tagged as being a little mad and eccentric, but since taking over from the injured Michel Vorm, Gerhard Tremmel has helped Swansea City rise to the dizzy heights of seventh in the Premier League.

Going into Saturday's match against Norwich they are just three points off a Champions League qualification place; Ian Hunt will be heading down to the Liberty Stadium to discuss the Swans great form with the German 'keeper.

Sport Wales will also be in Wrexham to see how the Blue Square Premier side are getting on. Their match against Alfreton was called off on Tuesday night, but with just three points separating them on top of the table Newport County we have hit the training ground to see how Andy Morrell's side are doing.

We will also be getting 'inked-up' with Dragons defender Mark Creighton as he shows us round his tattoo parlour.

And finally, while 2012 has been a vintage year for most sports, it has been a very disappointing 12 months for our Welsh tour golfers. Last week the likes of Rhys Davies and Bradley Dredge had one final chance to keep their place on the European Tour.

Sport Wales went to Spain to see how they got on during the mammoth six rounds of Qualification School.

So join Dot Davies for BBC Sport Wales this Friday at 2200 BBC Two Wales and remember to follow us on Twitter via @bbcsportwalestv.