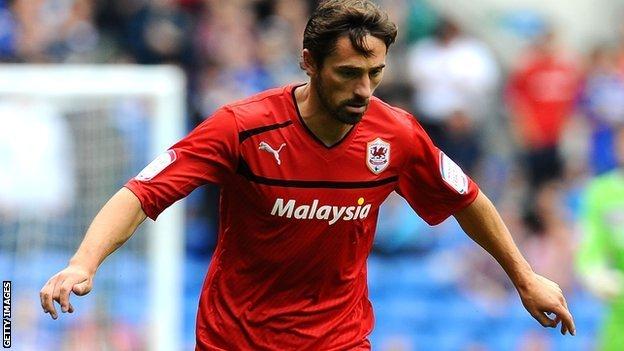 Leaders Cardiff City will still be without forward Tommy Smith because of a hamstring injury for Friday's Championship match at Blackburn.

But winger Craig Noone is available after suspension as the Bluebirds aim to strengthen their position on top.

Smith hasn't played since suffering a hamstring injury in the 2-1 win over Watford on 23 October.

"He's probably still a little bit away, but he's coming on all the time," said City boss Malky Mackay.

Smith could be fit again in time for the match against Peterborough on 15 December.

"We'll definitely look towards that next week," said MacKay.

"He needs to get back involved with the main group and once he does that then he's straight back into it again.

"But it's that little last bit that you need to be careful of otherwise it can set you back, but he's heading in the right direction."

Noone's return is a boost for MacKay following the player's suspension after being sent off in the 1-1 draw at Derby on 27 November.

The Bluebirds leapfrogged Crystal Palace to return to the top of the Championship after their 1-0 win over Sheffield Wednesday on Sunday.

That was the 10th consecutive win at home this season - a new club record.

And Mackay has praised the players who have helped Cardiff City maintain their form when the squad was hit by injuries over the past six weeks.

As well as Smith, Cardiff City have been without Craig Bellamy, Ben Turner, Andrew Taylor, Kevin McNaughton, Stephen McPhail and Jordon Mutch, while Nicky Maynard is out for the season.

"A couple of weeks ago it was all hands to the pumps," said Mackay.

"We got through that and we've got the players back again which is good.

"These things can just happen out of the blue and it's how you cope with it in those times, but it's good that we've got them back fresh for this little busy period coming up."

Mackay was impressed with the way some younger members of the squad have helped out, but reserved the highest praise for senior players such as Mark Hudson and Haidar Helguson.

"There's four or five you could throw in there Peter Whittingham, [David] Marshall, [Matt] Connolly who have been the mainstay of the team over this period.

"Every club is looking for those guys - the consistent professionals, model professionals and that's not an easy thing to do."