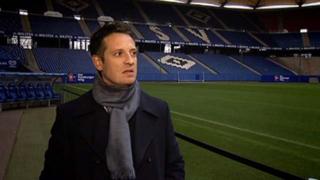 How does a former Wrexham youth coach from Rhyl end up with a job helping to revive the fortunes of one of Germany's most famous clubs?

Sport Wales has been in Hamburg to tell the tale of Lee Congerton, who started his coaching career at Wrexham before his big break as part of the backroom staff at Liverpool.

From Anfield, he moved to Chelsea where he worked alongside the likes of Jose Mourinho, Carlo Ancelotti and former Blues youth coach Brendan Rodgers, working his way up to the role of head of recruitment.

And when Chelsea's former sporting director Frank Arnesen took up a similar role at Hamburg, Congerton moved to the Bundesliga club with him to become their technical director - a job involving everything from player recruitment to making sure the club's players are in the best shape.

The 39-year-old is fast building a reputation that has already seen him linked with a similar job at West Bromwich Albion, while other Premier League sides are thought to be keen on Congerton as more of them consider moving towards the continental model of employing sporting and technical directors to work alongside managers.

Sport Wales is at 19:00 GMT on Friday, 14 December on BBC2 Wales and afterwards on BBC iPlayer.