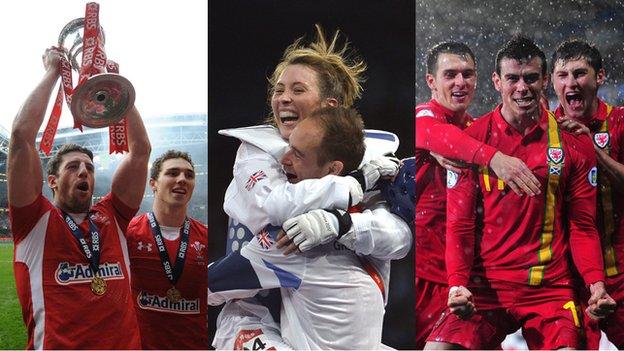 A remarkable 2012 will go down as a vintage year for Welsh sport, with the nation's teams and individual athletes hitting some notable heights.

BBC Sport Wales takes a look back at some of the biggest talking points from the past 12 months: 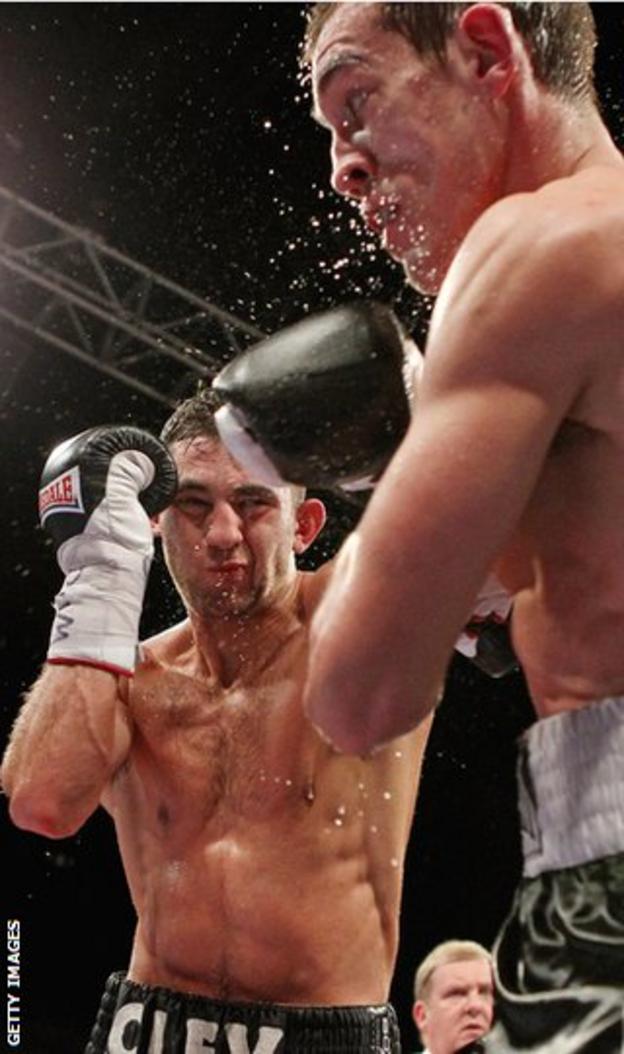 The undefeated 25-year-old from Cefn Fforest handed Tommy Karpency his first defeat with an unanimous points decision in February 2012 in Cardiff.

Cleverly then made the trip to Los Angeles in November to end the challenge of Shawn Hawk in the eighth round, improving the Welshman's record to 25 wins from 25 fights.

In March, Merthyr's Kerry Hope won the European middleweight title, beating Grzegorz Proksa in Sheffield but then - and his belt - to the Pole in July.

Gavin Rees beat Anthony Mezaache with a seventh-round stoppage in his European lightweight clash in March, then

There were British titles for super-featherweight Gary Buckland who saw off challenger Paul Truscott, and cruiserweight Enzo Maccarinelli who beat Shane McPhilbin. However, former WBO champion Maccarinelli's comeback trail hit the buffers in November as he lost a Commonwealth light-heavyweight bout in two rounds to Ovill McKenzie.

Buckland stayed busy in 2012, seeing off Innocent Anyanwu in a non-title fight before defending his belt by in November.

Swansea defied all expectations in their first season back in the top flight as many pundits' tip for the drop finished 11th in the Premier League, winning admirers with their stylish brand of football.

A 3-2 win against Arsenal in January grabbed headlines, while the 1-0 win against eventual champions Manchester City in March confirmed the Swans could mix it with the elite.

Swansea became victims of their own success as manager Brendan Rodgers and midfield playmaker Joe Allen departed for Liverpool.

Former Real Madrid, Barcelona and Denmark player Michael Laudrup took the reins at the Liberty Stadium for the 2012/13 season and in October put one over the former boss with a 3-1 League Cup win at Anfield, which secured a place in the quarter-finals.

They went on to reach the semi-finals of the League Cup for the first time with a win against Middlesbrough and face Chelsea in the New Year.

Cardiff City again came agonisingly close to promotion from the Championship but lost their play-off semi-final across two legs against West Ham United.

It was a season of near misses for the Bluebirds, who also reached the League Cup final only to lose on penalties to Liverpool. 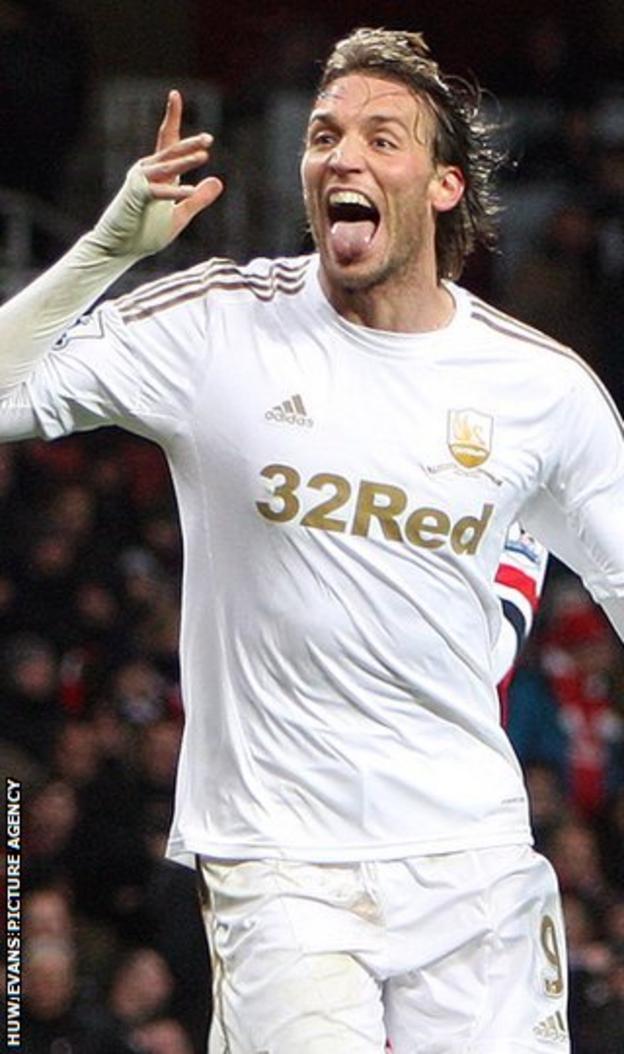 The red faces at the end of the 2011/12 season were soon matched by red shirts, as Cardiff's Malaysian owners oversaw a kit rebranding that split opinion amongst the fans.

However, the new red home kit for the Bluebirds went hand-in-hand with investment promised to clear the club's historical debt, estimated at £30m, and provide funds for manager Malky Mackay to strengthen his squad.

So far the signs are good that Cardiff can finally break free from the Championship and join Welsh rivals Swansea in the Premier League. They have been one of the pace-setters and a 1-0 victory over Sheffield Wednesday in early December set a new record of 10 successive home wins, bettering runs achieved in both the 1951/52 and 2000/01 seasons.

The curse of the play-offs also struck Wrexham, who had led the Conference for much of the season but slipped out of top place and then lost in the semi-finals to Luton Town.

But things improved for Andy Morrell's side off the pitch, with the Supporters' Trust taking over the club to quell fears over Wrexham's continuing existence.

Wrexham are now pushing for promotion to the Football League once again, as are their Welsh rivals Newport County who seem to have come through their own off-field troubles.

Newport reached the final of the FA Trophy, only to lose to York City, but only avoided relegation by six points.

The off-season saw more than a few upheavals, with a move away from their council-owned Spytty Park home to ground-share with the city's rugby teams at Rodney Parade, plus chairman Chris Blight standing down and a EuroMillions winner - Les Scadding - who scooped £45.5m in November 2009 joining the board.

The changes have gone hand-in-hand with bigger crowds and better results in the first part of the 2012/13 season, and Justin Edinburgh's side are now a force to be reckoned with in the Conference.

In the Welsh Premier, The New Saints claimed the title in style as they beat Bangor 5-0 in a winner-takes-all finale at Park Hall.

While Wales' club sides appear set to enter 2013 in rude health, the national team has had a testing year.

Wales lost friendlies against Costa Rica, Mexico and Bosnia-Herzegovina, before starting their 2014 World Cup qualifying campaign with defeats to Belgium and Serbia.

Gareth Bale then scored both goals in a dramatic 2-1 win over Scotland in October, a result that earned Coleman a first win as Wales manager. Although a 2-0 loss in Croatia followed, there are signs of the green shoots of recovery for the national team.

The new year started with a bang thanks to typically gritty Welsh derby in the Pro12 on 1 January, as the

The game was given added spice thanks to Blues back Gavin Henson returning to the Liberty Stadium for the first since quitting the Ospreys in controversial circumstances in October 2010. Henson would later be released by the Blues following some mid-flight shenanigans and the utility player now plies his trade for London Welsh. 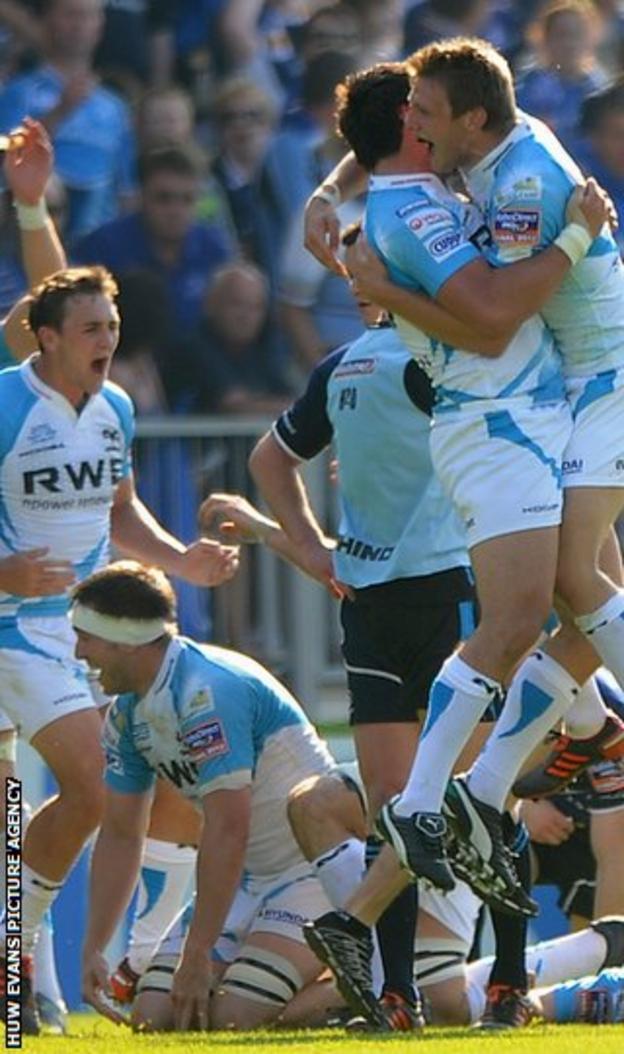 While the four Welsh regions struggled to make an impact in Europe, the Ospreys finished the season top of the Pro 12 pile, humbling Munster 45-10 in the play-off semi-finals before a thrilling last-gasp 31-10 win in Dublin against Leinster saw them crowned champions.

The game was a fitting bow for Shane Williams, as the wing signed off his professional playing career in Wales with the winning try - although it needed a brilliant touchline conversion from Dan Biggar to edge Ospreys ahead of a stunned Leinster.

There was also a title to savour in the Six Nations as Wales romped to a third Grand Slam in eight years, in Cardiff in the final game in March.

The rest of the year was not so good for Wales. Head coach Warren Gatland suffered a double heel break in a domestic accident in April, before caretaker coach Rob Howley oversaw a 3-0 Test series whitewash in Australia that June.

Gatland's mishap while decorating did not prevent the Kiwi being named as British and Irish Lions head coach for the 2013 tour to Australia.

Howley's record was not improved in the autumn internationals, as Wales slumped to defeats against Argentina and Samoa under his stewardship before Gatland returned to take charge of losses to New Zealand and Australia.

That saw Wales drop out of the world's top eight teams just in time for the draw for the 2015 World Cup, which saw them pitted in a pool alongside hosts England and those pesky Wallabies once again.

But there seems to be a new crop of rugby talent on its way, with Wales Under-20s inflicting the first defeat on New Zealand's Baby Blacks for four years in the Junior World Championships in South Africa.

On the domestic front, Cross Keys won the Swalec Cup for the first time in their history having also reached the British & Irish Cup final, while Pontypridd held off Llanelli to claim the Welsh Premiership title.

Welsh competitors at London 2012 claimed seven medals, their highest total from any Olympic Games, while Welsh Paralympic athletes contributed 14 medals, which matched the total won in Beijing four years ago. 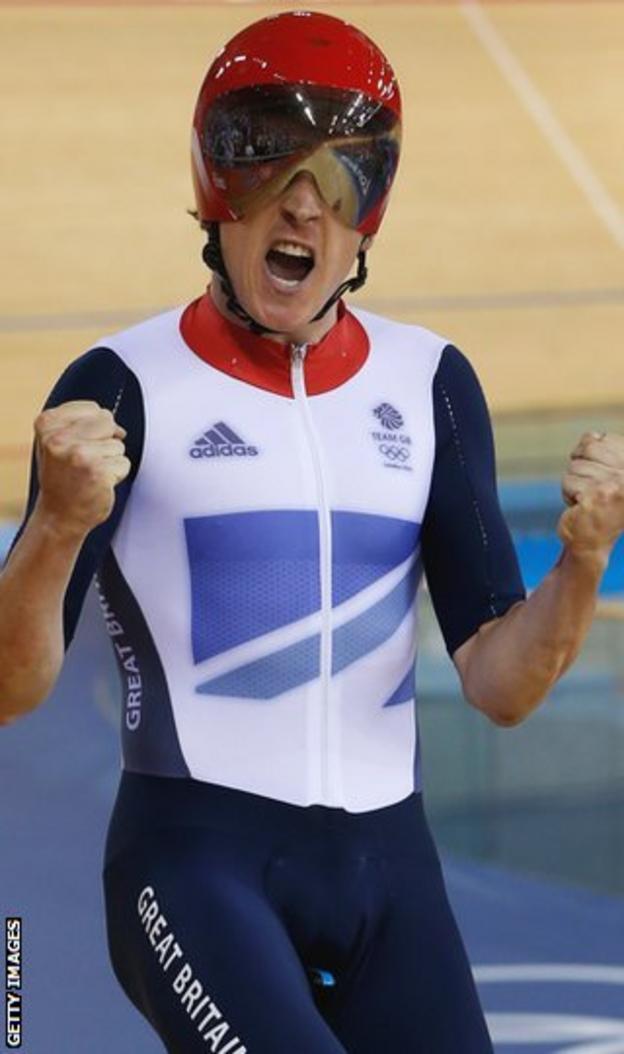 Rhys Williams had claimed the European Championships 400m hurdles crown in Helsinki in June, but neither he nor reigning World and Commonwealth champion Dai Greene were able to win medals.

There was also disappointment for triathlete Helen Jenkins, like Greene tipped for medal success, as injury hampered her preparations.

Swimmer Nyree Kindred won one of Wales' three silver medal in the women's S6 backstroke, with Colbourne adding silver in both the C1-3 kilometre sprint and the C1 road time trial to his gold in the 3Km pursuit.

Wales won seven bronze medals with Claire Williams and Beverley Jones winning the respective F11-12 and F37 classes in the discus, and Davies added the F42/44 shot put bronze to his discus gold.

Liz Johnson picked up a bronze in the SB6 100m breastroke in the pool, while Rachel Morris won hers in the handcycling H1-3, and Olivia Breen & Jenny McLoughlin were part of the bronze medal-winning T35-38 4x100m relay team.

Outside of London 2012, there were World Championship titles for Geraint Thomas, Colbourne and Mills.

The great success at London 2012 was reflected in the end-of-year BBC Cymru Wales Sports Personality of the Year 2012 award, with all six Olympic and Paralympic gold medallists nominated in a 10-strong list.

And it was 19-year-old Jones who emerged as the winner after a public vote, with rugby union back-row Dan Lydiate the runner-up and Thomas third.

In women's golf a Great Britain & Ireland team - including Welsh player Amy Boulden and captained by her compatriot Tegwen Matthews - won the Curtis Cup for the first time since 1996. 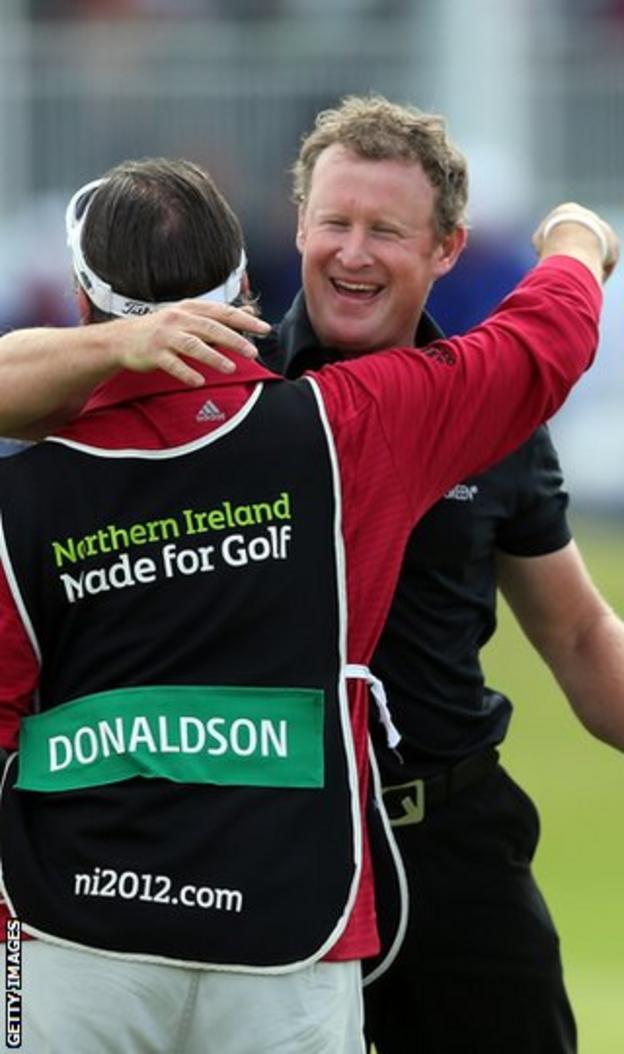 Jamie Donaldson also flourished at the Irish Open, holding off a crop of Ryder Cup stars to win his first European Tour title. However, it was a difficult year for Rhys Davies, Bradley Dredge, Stephen Dodd and Liam Bond, who all failed to win European Tour cards for next season.

Non Stanford won the World Under-23 women's triathlon title, and Leanda Cave was crowned both the Ironman and Half Ironman women's world champion.

Although they did not make the Olympics, rising cycling stars Elinor Barker, Becky James and Owain Doull continued to demonstrate their growing talent.

Barker claimed the Junior Time Trial World Championship on the road in New Zealand and the Junior European Individual Pursuit and Team Pursuit titles on the track in Portugal during 2012.

The 18-year-old also won Junior Time Trial gold at the World Road Championships in the Netherlands in September.

In motorsport, Chaz Davies won his first World Superbikes race in Germany's Nurburgring and this season looks bright after a move to factory team BMW Motorrad.