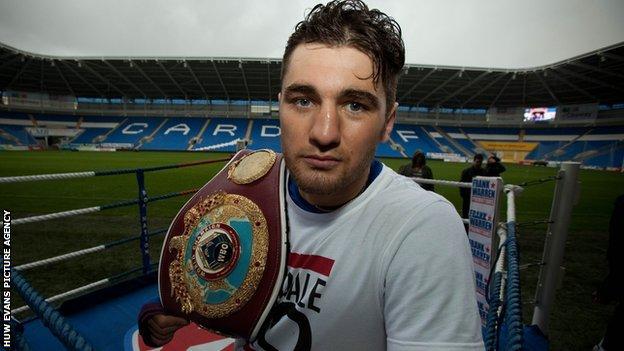 Nathan Cleverly will defend his WBO light-heavyweight title against Robin Krasniqi on 16 March.

No venue has yet been set but Cleverly's promoter, Frank Warren, has won the purse bid to stage the bout.

Cleverly would prefer it to be in Cardiff but the Welshman, 25, has said he would be willing to face Krasniqi in Germany, where the Kosovan is based.

The WBO threatened to strip Cleverly of his belt unless a bout with mandatory challenger Krasniqi, 25, was arranged.

Cleverly was due to meet Krasniqi in April 2012, but had to pull out with illness.

He hopes an impressive win over the twice-beaten challenger will open the way for unification fights in 2013, with WBA champion Beibut Shumenov one potential opponent.

Another option would be a bout with the winner of the fight between IBF champion Tovaris Cloud and Bernard Hopkins, who meet on 9 March.

"I think if the fight is in Germany, where it is notorious that the fighters get home decisions, I feel I'll really have to go out there and perform and put this guy to the sword," said unbeaten Cleverly.

"I've got to perform and impress against this guy and that's going to set up the rest of 2013 then for the big unification fights... Everything will fall into place after this fight.

"If it all goes well with the Krasniqi fight, Shumenov is definitely in my sights and I would definitely like to fight the winner of Hopkins and Tovaris Cloud."

Cleverly defended his title for the fourth time in November by stopping American Shawn Hawk in Los Angeles in the eighth round.

The WBO sanctioned the bout against an unranked opponent with the condition that Cleverly made a mandatory defence against Krasniqi within 90 days.

Warren won the bidding process for that fight on Wednesday and a suitable venue will now be sought.

Since losing two of his first three fights seven years ago, Krasniqi has won 38 consecutive fights, stopping 14 of his opponents.