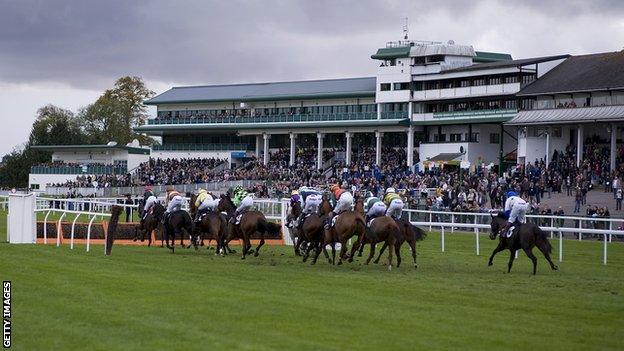 Expected heavy rain could put the running of the 2012 Welsh National at Chepstow in jeopardy.

Clerk of the course Keith Ottesen and his staff are monitoring the rainfall day by day before the race on Thursday, 27 December.

Significant rain is forecast in south Wales for Friday and Christmas Eve - just three days before the race.

"No doubt by Friday morning we are going to be saying we are almost waterlogged," said Ottesen.

"At the moment the going is pretty heavy. We have had 45mm of rain from last Friday through to Monday.

"But each time we get a dry day I think the course is in very good condition so it will improve quickly.

"However, Saturday and Sunday we are expecting some more rain. So at the moment it's a bit of a wait-and-see situation.

"But, fingers crossed, all preparations have been done and we are ready to go for next Thursday."

It is not the first time the weather has affected the Welsh National meeting.

In 2010 the Welsh National was postponed by snow and was eventually run 12 days later.

And in 1994 the race was moved to Newbury on New Year's Day.

But Richard Lee's nine-year-old will not be back to defend his title after being injured in routine work on the gallops.

Lee said: "It's hugely disappointing but these things happen unfortunately and the sooner it becomes public knowledge the better.

"I don't know how bad the injury is as I'm at Towcester at the moment, but it's a high hind limb injury of some sort.

"Hopefully he can be saved, but how bad it is I just don't know."

Welsh-trained Teaforthree, Michel Le Bon from Paul Nicholls' yard and Cheltenham winner Monbeg Dude are among the 55 entries for this year's race.

Harry The Viking, owned by a syndicate including Manchester United football manager Sir Alex Ferguson, is also set to run.