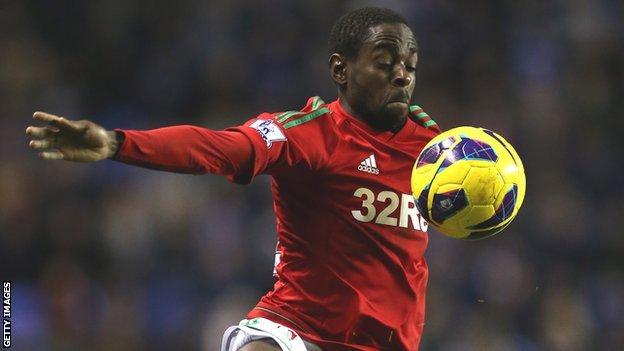 Swansea City have a golden chance of making history in the semi-final of the Capital One Cup, according to winger Nathan Dyer.

The Swans face a first leg against Chelsea at Stamford Bridge on Wednesday, with Dyer itching for a chance to play in a Wembley cup final.

"For a lot of people this might be their best chance of getting to a major cup final," he said.

The Swans' cup run so far

Swansea have been to Wembley three times before, winning the Autoglass Trophy in 1994 and losing in the Third Division play-off in 1997.

The last time the Swans were at Wembley they beat Reading 4-2 in the 2011 Championship play-off final to become the first Welsh club to claim a place in the Premier League.

Dyer was a key member of that winning Swansea team in 2011, and believes they can scale the heights again.

"Swansea City as a football club and as a city in general has made massive strides from where they were a couple of seasons back to now," said Dyer.

"It's a great achievement and obviously we want to give something back to the loyal fans and to ourselves as well."

"It's Chelsea, they're a very big team, champions of Europe and they've added to their squad with Demba Ba who is a goal scorer.

"So obviously it's a massive squad, but then again we can play football and come away with results ourselves.

"We're a good side, a really good side, and I think a lot of the bigger teams now are thinking we're not a pushover and it is going to be a game."

Swansea have not appeared in the semi-final of one of the two major English cup tournaments since 1964, when they were beaten in the last four of the FA Cup by Preston North End.