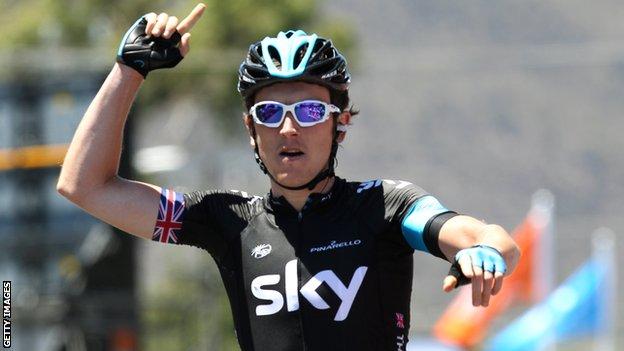 Geraint Thomas admits he faces a challenge to keep cycling's Tour Down Under leader's jersey.

The 26-year-old Welshman broke away on the Corkscrew Hill climb before powering to victory into Rostrevor.

"I want to try to keep it for sure but I think tomorrow [Thursday] is probably the most challenging day for the team as a whole," he said.

Thomas avoided a late pile-up which took down world champion Philippe Gilbert and edged out Movistar's Javier Moreno for the stage win, with Ben Hermans third for RadioShack.

But the Cardiff-born rider is aware of the challenge he will face in keeping the ochre jersey in Thursday's third stage from Unley to Stirling in the Adelaide Hills.

And Thomas says his Team Sky team-mates will play a crucial role if he is to maintain his overall lead in Australia in the first major road race of the year.

"The boys, it's over to them to try to help me out and defend that jersey," added Thomas.

"We start on quite a long drag uphill and it's a nasty 10km or so, so it will be hard to keep together there. And any group that does will be strong guys.

"It's going to be a tough one for sure, but I think we've got to take every day as it comes. Hopefully we'll have it by the end of the day.

"I think we've definitely got one of the strongest teams in the race."

Thomas, who won his second Olympic gold in the team pursuit at London 2012, is pleased with his start to the new season after a gruelling winter.

"It's great to start the year like this and long may it continue for the team," he said.

"Since the Olympics my attention turned straight to this season.

"I was straight back on the road racing. I knew I just had to get back into it and do some sort of conditioning in the winter.

"I started quite early - mid-October - and I've been building up getting a good base in and it's paid dividends."