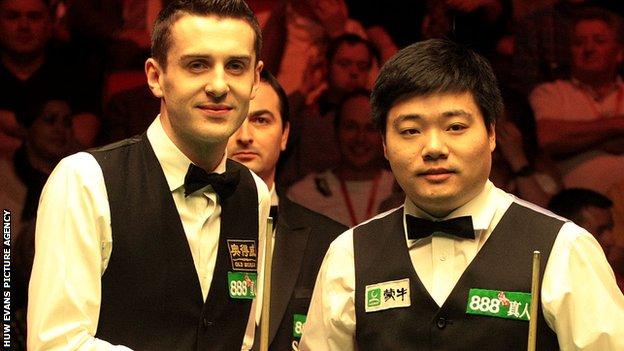 Defending champion Ding Junhui believes Mark Selby will be the man to beat at this year's Welsh Open.

Englishman Selby has won the UK Championship and the Masters in recent months.

"Mark is always very hard to beat because he never gives up and doesn't make many mistakes," said Ding.

"In the final last year I had to try my hardest on every shot.

"Mark is the best player at the moment but I would be happy to play him again, it's good to go up against the best."

Ding opens up proceedings on day one in the final qualifying round on Monday and will discover his opponent on Sunday.

Welshmen Mark Williams and Matthew Stevens will also be among those battling for the £50,000 top prize.

Williams, a tournament winner in 1996 and 1999, admits he and his fellow countrymen have underachieved at Newport during recent years.

"I haven't done very good there for the last few years," Williams said.

"I always go out in the first couple of rounds along with Matthew [Stevens] and Ryan [Day].

"Hopefully one or two of us can have a good run and we should really be getting to the latter stages of that tournament.

"We haven't done for a long time and it's a bit shameful that we can't because there is a good crowd there and they'd like someone Welsh to get through to the latter stages.

"Fingers crossed, one of us can this year."