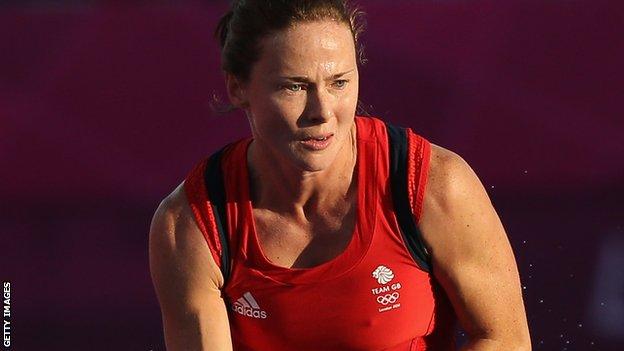 Olympic hockey bronze medallist Sarah Thomas has announced her retirement from the sport.

"Having won bronze in London 2012 I feel really content with my career," Thomas said.

"I did achieve my dream of winning an Olympic medal."

Having been to two Olympic Games it's time for me to look forward.

Thomas represented Wales at every level from under 16 to the senior international side, making her debut at 16.

She captained Wales and represented her country at the 2010 Commonwealth Games in Delhi.

The Merthyr-born player spent eight seasons playing professionally for Rotterdam in the Netherlands.

But having been part of Team GB's bronze winning hockey squad last year, Thomas felt the time was right to retire.

"It's been a fantastic 18 years and I have loads of wonderful memories." Thomas added.

"My body's held up well and I was playing well in my opinion so I thought it was a good time.

"I've not picked up a stick in six months and that time has flown but I've barely put it down for 18 years prior to that.

"It is a really strange feeling [but] at the same time I guess I'm ready for something new."

"Having been to two Olympic Games it's time for me to look forward."