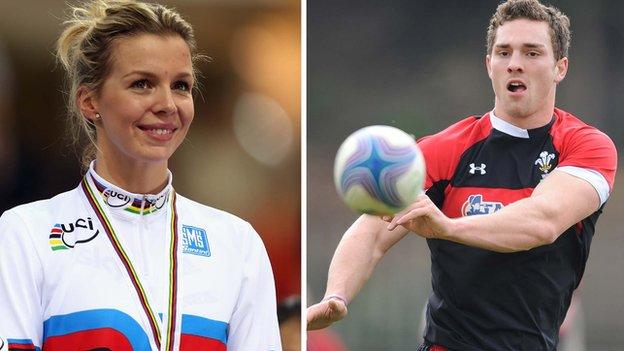 The 21-year-old won the women's sprint and keirin at the championships in Belarus, having won bronze in the team sprint and 500m time trial.

"She was excellent," said North, who played for Wales in the 26-9 Six Nations win in Italy.

"I know that she has worked so hard over the last few months and to have a weekend like that was excellent for her."

The Abergavenny rider's success in Minsk came after she missed out on competing in last summer's Olympic Games.

Injuries and illness hampered her preparations for London 2012 and she was only a reserve for the women's team sprint event.

Boyfriend North says her achievements in Minsk have been the talking point among his Wales rugby team-mates.

Her success came on a weekend in which Wales secured their second successive away win in the Six Nations with victory over Italy in Rome.

Ryan Jones, who captained Wales in Rome, tweeted: "So @George_North what's its like being the second best sports person in your relationship?!"

But Scarlets player North has taken it all in good humour.

"There's a bit of banter flying about," he said. "That's rugby."