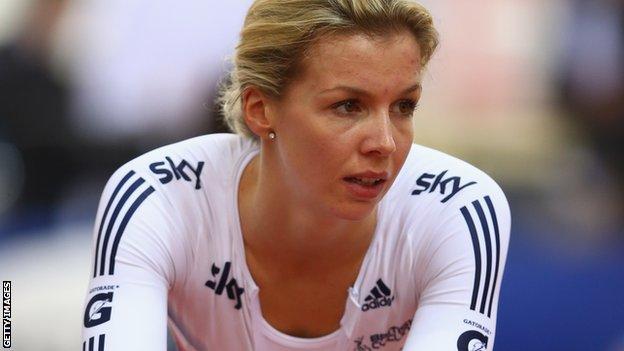 Double world champion Becky James has said she knows she cannot get too carried away with her prospects for the next Olympics in Rio.

The 21-year-old has been tipped as a potential star of the 2016 Olympics having missed out on the London Games.

"It's a few years away so I'm just focusing on the stepping stones towards Rio," said James.

"I'm hoping to keep developing and each year get faster and faster.

"I've got a long season ahead with the World Cups and World Championships again next year.

"That's what I'm going to be aiming to do and hopefully be the fastest woman in 2016."

James won the women's sprint and keirin at the championships in Belarus, having won bronze in the team sprint and 500m time trial.

Her success in Minsk came after she missed out on competing in last summer's Olympic Games.

Injuries and illness hampered her preparations for London 2012 and she was only a reserve for the women's team sprint event.

The Abergavenny rider says her championship medals made up for missing London 2012 and paid tribute to the support she received from the British team.

"The last year's been tough especially with the Olympics and missing out. I was really disappointed and a bit down in the dumps," James said.

"They [GB cycling coaches] said I had to forget about it and move on and they helped me through that.

"It's nice for me to be able to achieve that but it's so nice for them to see me achieving that too.

"It was hard missing out but it gave me more motivation. I've been really healthy this year, trained so hard and it's worked out so well for me and worked perfectly at the World Championships."