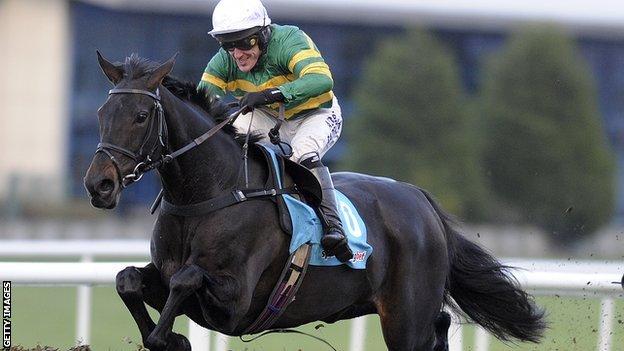 Welsh trainer Rebecca Curtis is seeking to repeat last season's breakthrough win at Cheltenham with a second success at the Festival.

This time around, the rising star from the Pembrokeshire yard is At Fishers Cross, owned by Irish horseracing supremo John 'JP' McManus and unbeaten in his last four starts.

The six-year-old goes in the three-mile Albert Barletts Novices Hurdle on Friday and is one of the favourites - prices hovering around 4-1 - alongside two other Irish challengers, Ballycasey and Pont Alexandre.

That's one thing that AP [McCoy] has always said about At Fishers Cross: he loves to get into a battle and he's real tough, he'll never give in

The Willie Mullins-trained Pont Alexandre, already a favoured Ruby Walsh ride, is thought to have changed hands for close to £300,000.

In contrast, At Fishers Cross was bought at a far more "affordable" price and epitomises the prudent, studied approach by Curtis and her partner, Gearoid Costelloe, that prefers to look for potential and build on that.

The results have been there for all to see and Curtis' name is now mentioned alongside the more established yards of fellow Welsh trainers Peter Bowen, Evan Williams and Tim Vaughan.

"He [At Fishers Cross] went through two sales rings but he was lame both times, he's always had his issues physically so that's how we were able to get him at an affordable price," Curtis told BBC Wales Sport.

"We've managed to iron out those issues with him, which is why he's jumping and everything has improved this year.

"He's had a lot of attention... nothing major with him, just little niggley problems, but had he been a sound horse at the time we'd probably never have managed to buy him, so it's probably all worked out for the best in the long run."

At Fishers Cross soon caught the eye of McManus, who wasted no time in partnering champion jockey Tony McCoy with his new acquisition.

"After he'd won his bumper in Ireland and then after we bought him he won his second bumper, he [McManus] bought him after that," Curtis added.

"We didn't ask stupid money for him; he was a horse who obviously had clear ability and was worth taking a chance on."

Four wins this season from his six outings - the last two at Cheltenham, plus successes at Newbury and Ffos Las - have repaid the faith shown by Curtis and McManus in the gelding.

At Fishers Cross has excelled on heavy ground and with Cheltenham largely reporting good to soft going, despite the freezing conditions, Curtis would ideally prefer a few welcome showers to hit the Festival before Friday.

"He was always a horse we knew had loads of talent, natural ability... we always hoped he'd be a good horse and he's gone on to prove it thankfully," Curtis said.

"There's always a bit of pressure when you've got a favourite there, especially for a high-profile owner like JP, we've just got to hope they do get a little bit of rain in the ground because I would be a little bit worried with his jumping on that really fast surface.

"Other than that he should handle the good ground but... when things are slowed down a little bit he can get into a rhythm [with his jumping] and he finds things a lot easier.

"That's one thing that AP [McCoy] has always said about the horse: he loves to get into a battle and he's real tough, he'll never give in until the last minute.

"He's run round there twice now and obviously the last time wasn't over his ideal trip, it was two-and-a-half [miles], so I think it was a real credit to the horse that he won and just battled on so well up the hill."

Curtis also has O'faolains Boy scheduled to go in the Albert Barletts Novices Hurdle on Friday, less fancied than his Fforest Farm stablemate, but still has been backed down to 16-1.

If either of them can head the field on Friday, then Curtis will be able to relive the emotions that Teaforthree's victory brought last year.

"It was amazing, really overwhelming when you walk in there with the crowd and the noise," Curtis added.

"I suppose at the time it doesn't really sink in that you've had a winner until you go back and re-watch it all, so just for us to have it [a major win] that early on in my career is great.

"We were surprised it didn't really increase the amount of owners we had in the yard. We thought it might, but to be honest most of the good horses we've got we brought in ourselves and we've been picky what horses we keep.

"I don't think to this day we've been sent a horse any good at the moment by any owners. I know that sounds bad, but that's what's nice about what we do at the moment - we source our own horses and sell them off to owners, that seems to work well."

Teaforthree, who since his Cheltenham success has gone on to be the Welsh National runner-up, is being considered by Curtis for entry into the John Smith's Grand National at Aintree in April.