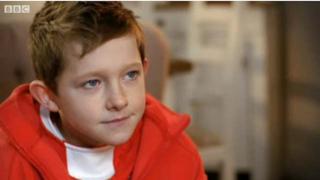 Played by 10-year-old Nathan Blackmore-Davies, he brought the match ball onto the Millennium Stadium pitch ahead of Wales' 30-3 defeat of England on 16 March.

Not only did he confound his dad's pre-tournament warnings, Scott also met his heroes.